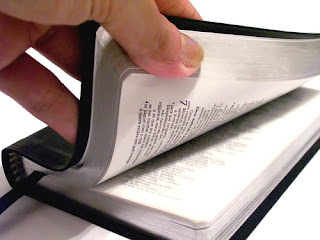 Who wrote the books of the Bible? Whether divine guidance is conceded or not, all agree that human beings were involved in the production and transmission of the sacred writings. On the "fundamentalist" end of the spectrum, as long as God is recognized as the primary author, human instrumentality is of little consequence. On the opposite end, the legitimacy of the biblical record can be more easily challenged if orthodox attributions are discredited.
In many scholastic circles there appears to be a general aversion to accepting or even considering conventional authorial appellations, including the self-claims of the texts. But alternative judgments based on conjectural argumentation, unwarranted assumptions, circular reasoning, and excessively complicated redaction and compilation theories manifest a strong appearance of grasping at straws. A number of significant variables must be ignored or trivialized in order for the opposing position to seem credible (to be discussed).
When a biblical text does not fit into the restrictive mould of a critic’s rigid presuppositions, it is immediately called into question. Even though a circumstantial case may be articulated in such a way that seems reasonable and persuasive, how does it measure up to the scrutiny of hard evidence and basic common sense?

Assumption # 1: "Because pseudepigraphy (literary forgery) was widespread in the Greco-Roman world, pseudonymity (false attribution) must have been an acceptable literary practice and thus common among early Christians."

It is an enormous leap to conclude that the prevalence of pseudonymous writings in antiquity implies that the practice was morally accepted. In fact, the ancients were just as concerned about literary integrity as modern man with his "copyright mentality." When spurious works were detected, they were denounced and rejected as forgeries. While anonymity was fairly common in Jewish and early Christian writings, it is nothing short of deceptive for a writer to have appended another’s name to his work without authorization, purporting that the ideas, personal details, and authoritative directives were from a well-known historical figure rather than himself. Since the Romans, the Greeks, and the Jews were extremely careful to maintain the authenticity of their literary collections (spurning all pseudepigraphical documents), why would anyone suppose that the followers of Christ were any less scrupulous? The fact of the matter is, no Christian writings that were known to be spurious were ever accepted as genuine in the early church (cf. Eusebius, Eccl. Hist. 6.12.3). This is especially true of apostolic letters, as the deceitful practice of epistolary pseudepigrapha was decisively condemned. Therefore, to casually label certain biblical documents as literary forgeries is out of place, prejudicial, and without solid justification.
--Kevin L. Moore