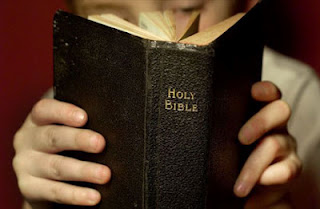 What does the Bible say to me, and how does it apply to my life? As important as these questions are, the proverbial cart is placed before the horse when they are the first to be asked. Conscientious Bible students should instead begin their investigation of any biblical text by considering what the inspired writer was seeking to convey to his original audience and how they would have understood the message in the context in which it was first communicated. When this is the preliminary focus, one is in a much better position to correctly interpret and apply the sacred writings as they were intended.
Who is speaking? This is a logical question to ask when examining any form of communication. A statement like, "Curse God and die!" (Job 2:9),1 although recorded in scripture, was not originally spoken by God or one of his authorized representatives. In addition to what has been revealed from heaven, the biblical record also contains words spoken by the devil (Matthew 4:3-9) and fallible human beings (John 8:48). Even true statements are not always attributable to a divine source (e.g. John 9:31; Acts 5:38-39; 17:28). The fact that the Bible is the inspired word of God simply means that whenever the sayings of uninspired individuals are recorded, an accurate account is given of what was said. As the pages of scripture are evaluated, the information's original source must be ascertained.
Who is being addressed? If this question is ignored or not answered properly, misunderstanding is the inevitable result. Jesus promised in John 16:13a, "when He, the Spirit of truth, has come, He will guide you into all the truth . . ." Would it be legitimate for me to read these words with a realistic expectation of all truth being directly revealed to me by the divine Spirit? By taking the time to examine the surrounding context (chaps. 13–16), it is clear that Christ is not speaking to me at all. In fact, while addressing the very same hearers in the very same setting he also says, "If I then, your Lord and Teacher, have washed your feet, you also ought to wash one another’s feet" (13:14). Contextually, Christ’s chosen apostles are the ones whose feet he had just washed and who were to receive the outpouring of God’s Spirit not long after these words were spoken (cf. Acts 1:1-8).
Who is the author? The sixty-six books of the Bible were penned by over forty separate writers whose forty+ different perspectives were utilized to transmit the biblical message. Bible study is significantly enhanced when the matter of authorship is taken into account. In the parallel Gospel records of the dispute over paying taxes, one might wonder why the common term dēnarion is used in Mark 12:15 and Luke 20:24, while the more precise nomisma (state coin) is employed in Matthew 22:19a. The fact that the author of the latter passage was a tax collector (cf. Matthew 10:3) is a reasonable explanation for this difference. In the synoptic accounts of Jesus’ statement about a camel going through the eye of a "needle," the term hraphis (an ordinary sewing needle) is used in Matthew 19:24 and Mark 10:25, whereas the word belonē (a surgeon’s needle) is found in Luke 18:25. This linguistic variation ought not be surprising, seeing that the latter text was authored by a physician (cf. Colossians 4:14).2 Of the three occurrences in the New Testament of the term deleazō (to "entice" or "lure" with bait), two appear in 2 Peter (2:14, 18), the significance of which is appreciated more when the question of authorship is considered (cf. Matthew 17:26-27).
Who is the intended readership? Before a biblical text says anything to me, it has already spoken to those who first received it. If would-be interpreters have little regard for the immediate audience of any writing, chances are the meaning will be misconstrued and the message misapplied. I recently heard a televangelist quote Matthew 11:12, "the kingdom of heaven suffers violence," making direct application to persecuted believers in modern-day Eastern Europe. The historical context of this passage was completely ignored, including the fierce aggression of Jewish Zealots in the contemporary experience of Jesus’ listeners and Matthew’s readers, and was replaced by current events far removed from the setting of the original message.
To what do the prophecies of Revelation 6 have reference? Is the first seal (vv. 1-2) an allusion to the present-day United States of America, with the rider of the white horse depicting the U.S. president, and the other seals (vv. 3-17) descriptive of the current war on terrorism and the advent of World War III? Such an interpretation implies that the message of Revelation had absolutely no relevance, meaning or application for the seven churches of the 1st-century province of Asia to whom it was addressed and for whom it was intended (1:4, 11). Moreover, the repeated warnings of "things which must shortly take place" (1:1, 3; 22:6, 10) are thereby rendered misleading. Alternatively, deciphering the complex symbolism is much less daunting when viewed through the lense of John’s contemporary audience. These readers were facing brutal and widespread persecution (1:9; 2:10, 13; 3:10; 6:9; 12:13; 16:6; 17:6; 18:24; 19:2; 20:4) and desperately needed a message of hope (2:7, 11, 17, 26; 3:5, 12, 21; 5:5; 12:11; 15:2; 17:14; 21:7). The bottom line is, since the day the sixth chapter of Revelation was penned, historical realities such as war, famine, disease, Christian martyrdom, and the fall of governing powers have not been restricted to modern times.
Any shallow, irresponsible approach to Bible study not only generates a great deal of religious confusion and division, it provides a superficial boost to the ammunition supplies of biblical critics. But when the right questions are asked and valid answers attained, God’s word is capable of providing a solid basis for religious unity, an effective pattern for spiritual guidance, and a powerful instrument for saving souls.
–Kevin L. Moore

Endnotes:
1 All scripture quotations are from the New King James Version (1985).
2 See Authorship of NT Gospels and Authorship of Luke-Acts.