Having recounted the names of certain individuals he had personally baptized at , Paul candidly admits, “I do not know whether I baptized any other” (1 Corinthians ). Despite his vital contribution as an apostle of Christ and the divine inspiration that guaranteed the inerrancy of his writings, evidently Paul was not omniscient. Yet his inability to remember reveals something even more notable. It appears that the apostle did not deem it necessary to keep a personal record of all the people he won to the Lord. Why is this significant?
Paul clearly understood the importance of baptism, as seen in his own experience (Acts ; ) and teaching (Romans 6:3-5; Galatians -27). However, it seems that whenever possible he refrained from immersing converts himself to avoid the kinds of problems exhibited at Corinth (1 Corinthians 1:10-17). Understandably he would not want to leave the impression that he was baptizing in his own name or that the ones he immersed could somehow feel superior to those baptized by someone else. Paul’s priority was to proclaim the gospel, which necessarily included instruction on baptism (1 Corinthians 12:13; 15:1-5; Acts 18:8), and when people responded to the message he preached, the responsibility of baptizing was apparently delegated to others.
Paul’s lack of recall illustrates his conscientious desire to give glory to God. He was never heard saying, “This is what I have accomplished in my work,” or “I baptized this many people during our recent campaign.” The reports of the humble missionary were consistently about what God has done (cf. Acts ; 15:4; ). The apostle certainly had a crucial role to play and he worked diligently in the Lord’s service, but he was always willing to acknowledge his own limitations and his firm conviction that it is “God who gives the increase” (1 Corinthians 2:1-5; 3:5-7).
Preachers, missionaries, and all other Christians need to learn to speak in the passive voice. Rather than saying, “I taught and baptized so and so,” or “I have baptized this many people this year,” wouldn’t it be better to simply announce, “So and so was baptized,” or “This many people have obeyed the gospel,” or “God has added this many souls to his church in our area this year!” The customary approach of Paul was to take the emphasis off the teacher and off the baptizer and to place it on the divine message and those responding to it. In so doing the Lord is glorified.
If asked, "How many souls have you helped bring to Christ?," how wonderful it would be if every member of the Lord’s church could honestly say, “I don’t know.” This would indicate that we were all fulfilling our evangelistic duty, that countless souls were being won to the Lord, and that credit for the conversions was exclusively given to God. It is admittedly a great honor to serve Christ and to minister to people and to be used as the Lord’s instrument, but when souls are saved through (despite!) our humble efforts, let us rejoice in what God has accomplished.
While the church may not be entirely where she ought to be in fulfilling the Great Commission (but praise God for all the good works that are being done!), we as individual disciples can at least work on our attitudes, perspectives, and involvement. May we all be so devoted to the Lord’s cause that we develop “Pauline amnesia” and give the glory to the One to whom it is due.
--Kevin L. Moore

Related Posts: The First Missionary Journey, And With Many Other Words

What Does Koinônia (“Fellowship”) Really Mean?

Related Posts: For or Against? 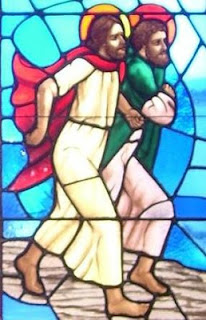 Related Posts: And With Many Other Words, Pauline Amnesia, Around the World in Three Decades, They Returned
Posted by amerikiwi at 08:42 No comments:

The Lineage of Jesus Christ According to Matthew