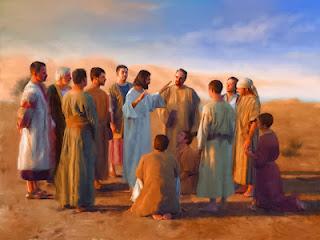 Although Jesus had connections among the religious elite in Judea (cf. Luke 2:41-47), for some reason he starts his movement with a ragtag bunch of Galileans. The northern province of Galilee was once known as “Galilee of the Gentiles” (Isaiah 9:1; cf. Matthew 4:15), having been controlled by Phoenecian king Hiram I of Sidon and later populated by the Assyrians with exiled foreigners. Within its borders were pagan cities and Hellenistic centers, such as Sepphoris and Tiberias. Archaeological discoveries of Galilean synagogues reveal Phoenecian influences and tolerance of other cultures3 – a stark contrast to the less indulgent Judeans. As a matter of fact, the inhabitants of Galilee and their Judean counterparts to the south were different in many ways.
Geographically the territory of the despised mixed-race Samaritans stood between Galilee and Judea (cf. John 4:3-4). Culturally the Galilean Jews tended to be less educated and less refined than the Judeans (cf. John 7:15; Acts 2:7; 4:13). Linguistically the Galilean accent was noticeably distinct from that of the more sophisticated Judeans (cf. Matthew 26:73). Politically the tetrarch Herod Antipas ruled Galilee, while Judea was under the control of the military prefect Pontius Pilate (cf. Luke 23:6-7). Economically Judea lacked the fishing and agricultural resources of Galilee and therefore faced greater economic hardships (cf. Acts 11:29). Religiously the Judeans enjoyed ready access to the temple and spiritual leaders, with a tendency to view their remote Galilean brethren with a degree of pious contempt (cf. Mark 2:18, 24). Needless to say, the relationship between the Jews of Galilee and the Jews of Judea was less than cordial.4
Galilee also had a reputation for political extremism and was the birthplace of the violent Zealot movement (cf. Acts 5:37; Josephus, Ant. 18.1.1, 6).5 The Zealots resisted the Romans with armed aggression and went on to instigate the Jewish rebellion that eventually led to Jerusalem’s destruction. Jesus’ band of Galileans would be more likely to raise the suspicions of the Roman authorities, especially if one of the disciples were known to be a Zealot (Luke 6:15).
Included in the original apostolic circle were at least two sets of biological brothers (Mark 1:16-20), although Matthew Levi the son of Alphaeus (Matt. 9:9; 10:3; Mark 2:14) and James the son of Alphaeus (Matt. 10:3; Mark 3:18) could have been related as well.6 The apostles were married, leading about their believing wives (1 Cor. 9:5),7 and at least some of them were homeowners (Mark 1:29; Luke 5:29; John 20:10).
There was nothing exceptional or remarkable about any of these men. In fact, they were rather ordinary and not without their share of shortcomings, struggles, insecurities and failings. They were not men of status and influence. They lacked formal education and religious training. None was an experienced teacher, spiritual leader, scholar, or traveler. Collectively they shared little in common. So why was this particular group of individuals assembled?
Jesus’ selections were anything but random or haphazard. Before appointing the twelve, he spent all night in prayer (Luke 6:12-13). He then invested countless hours over a three-year period mentoring, instructing, correcting, and guiding. After one defected, the Great Commission was issued, the Spirit was sent, the truth was revealed, and within just three decades the gospel had been taken into all the world (Matt. 28:16-20; Col. 1:5-6, 23).8 Within three centuries Christianity was declared the official religion of the Roman Empire, and despite horrendous odds Christ’s movement continues to flourish after nearly two millennia!
What happened to the intolerant, prideful, self-seeking “sons of thunder” (Mark 3:17; 10:35-44; Luke 9:54)? One became the first of the apostles to lay down his life as a martyr (Acts 12:2) and the other is now remembered as the apostle of love (John 13:23; 1 John 4:7, 8, 19; 5:2; etc.). The impetuous, unpredictable, explosive Simon Peter spent the rest of his life honorably representing the Lord as a rock-solid man of character and faith (2 Pet. 1:12-15). Though Matthew the tax collector and Simon the Zealot were natural enemies in the world, they were forever bonded together as brothers in Christ (Luke 6:15).
Despite all their glaring differences, these Galilean misfits faithfully labored together as a unified force spreading the gospel message (Acts 2:14, 37, 42; 5:42), facing extreme persecution (Acts 5:12-41; 12:1-4), handling conflict (Acts 6:1-7; 15:6), and laying the foundation upon which Christ’s church now stands (Eph. 2:19–3:5; Rev. 21:14). They endured hunger, thirst, lack of clothing, beatings, and homelessness, working with their own hands to support their families (1 Cor. 4:9-12). They were reviled, persecuted, defamed, and regarded “as the filth of the world, the offscouring of all things” (1 Cor. 4:12-13), while turning an upside down world right side up (cf. Acts 17:6).
How did such ordinary men accomplish such extraordinary things in the face of such intense opposition? The bottom line is, “they had been with Jesus” (Acts 4:13). It was Jesus who made the difference. Without him they were a motley crew with very little potential and no practical reason to be together. With him they were a powerful instrument through which God could and did effectively work.
The church today is still comprised of a bunch of unimpressive, imperfect, unworthy human beings. Individually we have very little to offer the world, and collectively we are exceedingly diverse. God accepts us as we are but does not leave us as we are. Our shortcomings are not to be used as excuses but overcome with divine help. Our petty differences are dwarfed by what we share in common in Christ. As we remain loyal to God and his word and maintain the spiritual bond that holds us together, the Lord’s church continues to be a powerful instrument through which God can and does effectively work.
“Because the foolishness of God is wiser than men, and the weakness of God is stronger than men …. But God has chosen the foolish things of the world to put to shame the wise, and God has chosen the weak things of the world to put to shame the things which are mighty” (1 Cor. 1:25-27).
--Kevin L. Moore

Endnotes:
1 Some manuscripts include the name “Lebbaeus” and others do not (see B. M. Metzger, Textual Commentary [2nd ed.] 21; also M. A. Robinson and W. G. Pierpont, NT in Original Greek [2005] 19). It was not uncommon in first-century Palestine and the Greco-Roman world for a person to have more than one name.
2 Simon is explicitly labeled "the zealot" by Luke (Luke 6:15; Acts 1:13), while Matthew (10:4) and Mark (3:18) use the more obscure term Kananaios (from Kananites), which is rendered in many English versions as "Cananite" but is actually derived from a Hebrew word meaning "zealot."
3 See Hebrew University of Jerusalem, "Remains Of Ancient Synagogue With Unique Mosaic Floor Found In Galilee," ScienceDaily, 27 Nov. 2007.
4 See Justin Taylor, “Seven Differences Between Galilee and Judea in the Time of Jesus,” 17 August 2011. <http://thegospelcoalition.org/blogs/justintaylor/2011/08/17/7-differences-between-galilee-and-judea-in-the-time-of-jesus/>. Web. 20 Dec. 2013.
5 See Ancient Terrorists.
6 Note, however, that Alphaeus was a fairly common name and would not necessarily apply to the same person.
7 Possible exceptions are Judas Iscariot and John’s brother James, both of whom were deceased by the time 1 Corinthians was penned.
8 See Around the World in Three Decades. Note that beyond the list of the apostles in Acts 1:13, only Peter, James and John are mentioned by name in the rest of Acts and the remainder of the New Testament outside the Gospels.

The Tough Love of Jesus 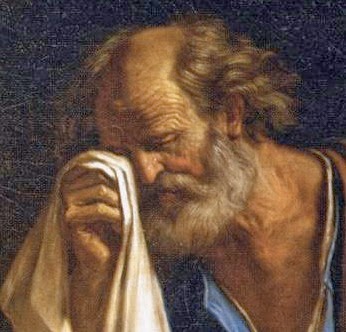 Image credit: painting by Guercino (1647), http://vultus.stblogs.org/st_peter.jpg
Posted by amerikiwi at 01:46 No comments:

Matthew 24: the End of the World or Jerusalem's Fall? Endnotes:
1 Unless otherwise noted, all scripture quotations are from the NKJV. See also the parallel accounts: Mark 13:1-37 and Luke 21:5-38. It was Peter, James, John and Andrew who asked the Lord these questions in private (Mark 13:3).
2 See The Day of the Lord.