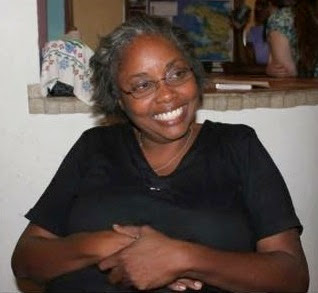 One of the great female missionaries of the 20th century was Sarah Andrews, who devoted the last two-thirds of her life to God’s work in Japan <see Part 1>. The year before a stroke ended Sarah’s distinguished missionary service, a baby girl was born in the USA who was destined to become one of the great female missionaries of the 21st century.
There’s a Call Comes Ringing
Roberta was the only daughter of Robert (Bob) and Laura Edwards. Raised in a military family, she was smart, disciplined, and determined. She was a homecoming queen, a college graduate, a department store manger, and a homeowner. By the world’s standards Roberta was a successful young woman. She also had a heart for Christ and his cause.
She married Robert Aldate and left her comfortable life in North Carolina to serve the Lord in Robert’s homeland of Haiti in 1995. Roberta learned the language and adapted to the culture of one of the least developed nations in the world, where four out of five people live in abject poverty. For about six years the Aldates were an effective missionary team, teaching the gospel, ministering to the Haitian people, and helping the church grow.
For Such is the Kingdom of Heaven
One day a desperate Haitian mother left her two baby boys outside the Adalte’s home in the hopes that the starving infants would be cared for. Not long thereafter Robert, who had been unfaithful to his marriage vows, abandoned his family responsibilities, leaving Roberta to care for the children alone. Church support ended. But Roberta refused to leave.
Jesse Robertson knew of Roberta’s plight, and he managed to secure $100 per month support for her. Destitute children continued to be brought to Roberta’s house and placed in her care. The Estes church of Christ in Henderson, TN took oversight of this work in 2003, and with a facility provided by Manna Global Ministries, the SonLight Children’s Home in Port-au-Prince was secured.
At least 31 children have been taken into the Home, and the oldest (Widlord Thomas, now 29) figures that some 50 to 60 children have passed through at various times. Christian Woman magazine featured Roberta on the cover of the January/ February 2010 issue, and in the feature article Debbie Bumbalough observes: “Roberta looks at every child as a gift from God. Her home is filled with those who not only have found food and security but also have found the true meaning of being loved and being able to return that love to others. Each of Roberta’s children has come to her with a past life of shame, regret, hurt, abuse or loss. Roberta has restored their self-worth and the support of a loving family atmosphere” <Link>.
Woman of Hope
Roberta has homeschooled the children and taught daily Bible lessons. They have grown their own crops on the small property, raised egg-laying hens, and initiated a variety of business ventures to supplement their income. They have worshiped and worked with the Santo church of Christ, as well as assisting nearby congregations. They have translated Bible study materials. The boys have been trained to serve as interpreters for visiting preachers, while Roberta and the girls have likewise assisted visiting lady teachers.
In addition to her “adopted” kids, Roberta has also provided two meals a day, five days a week, for around 160 neighborhood children through her nutrition center, in operation since 1997. This work was originally overseen by the Amory, MS church of Christ and later taken over by the Estes congregation. Moreover, Roberta has administered funds to enable these kids to attend school, which is a very big deal. Due to the expense of supplies and uniforms, fewer than 15 percent of Haitian children aged 6 to 11 are enrolled in public school. Consequently the country’s illiteracy rate is an estimated 52 percent.
Roberta has organized ladies classes, mentored interns, and coordinated several short-term mission and medical teams each year that have served the poor and up to 15 congregations at a time. The people of Haiti have suffered from numerous natural disasters, and Roberta has always been available to help facilitate relief efforts from North American churches. One of Roberta’s kids was killed in the devastating earthquake that hit Haiti in 2010, and despite significant property damage, Roberta’s home became a center for aid distribution that helped save thousands of lives. Since then Roberta’s work expanded to other development projects to help the poverty-stricken community. In 2011 she was named “Woman of Hope” at the annual Women of Hope conference in Nashville, TN.
O Death, Where is Your Victory?
On the evening of October 10, 2015, the day after a 29-member medical mission team had arrived from the States, the unthinkable happened. Roberta was stopped by armed gunmen and shot to death, while her 4-year-0ld foster son JoJo was abducted. Although the case is still under investigation, JoJo has reportedly been found alive and well, and two suspects are in custody.
More than a thousand people attended Roberta’s funeral in Haiti, and two more memorial services were held in the United States: one in Henderson, TN and the other in Wilmington, NC. At the Oct. 29th service in Henderson, Jesse Robertson read a poem by Edna St. Vincent Millay, aptly describing Roberta’s life: “My candle burns at both ends; It will not last the night; But ah, my foes, and oh, my friends – It gives a lovely light.”
Although Roberta’s candle is no longer burning, its radiant light continues to shine in the multitudes of lives she has impacted. Through her devoted ministry and lasting influence, the God she faithfully served for over five decades has provided love to the unloved and hope to the hopeless. Roberta’s work will carry on in Haiti thanks to the commitment of the Estes church and numerous other supporters, Widlord Thomas and his new bride Karen, the Haitian Christians, and the children Roberta molded and cherished. She is painfully missed. Thank God for the heavenly rest.
--Kevin L. Moore