Historical Background of the New Testament (Part 3): to the 1st Century AD 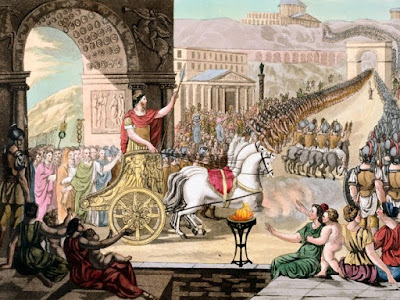 Rome was founded ca. 753 BC, although the Romans marked years according to AUC (Ab urbe condita or Anno urbis conditæ), i.e., from the founding of the city. The Roman Kingdom, consisting of the city and its territories, was ruled by kings until the expulsion of the last king around 509 BC (ca. AUC 244) and the establishment of the Roman Republic.

During this next period Rome’s dominance gradually extended throughout the Mediterranean world. The Republic was initially ruled by affluent families (patricians), led by two elected consuls advised by a senate. Due to political upheaval and civil war, Julius Caesar was appointed lone dictator until his assassination in 44 BC. Power was then shared among his adopted son Octavian and two of his generals, Lepidus (expelled in 36 BC) and Mark Antony (charged with treason and defeated in 31 BC). The senate appointed Octavian (Augustus) as emperor in 27 BC, officially ending the Republic and inaugurating the Empire.

The expanding empire of Rome set its sights on two Grecian strongholds: Syria and Egypt, with Judea sandwiched in between. General Pompey, while establishing Syria as a Roman province, was compelled to intervene in the Judean civil war in 63 BC, from which time Judea was regarded as a Roman protectorate and eventually placed under Roman administration. Antipater, a Judaized Idumean loyal to Rome, was set up as Judea’s governor, and in 37 BC his son Herod the Great was appointed by the Roman Senate as Judea’s king. After gaining control of the region by force of arms, he reigned as a friend of Rome for over three decades. Near the end of Herod’s authoritarian regime an empire-wide census was ordered by Caesar Augustus (Luke 2:1-2). This marks the beginning of the New Testament era.

The Roman Empire surrounded the Mediterranean Sea, extending eastward from the far western frontier of Spain all the way to North Africa, Judea, and Syria. Provinces regarded as peaceful and loyal to Rome were classified as senatorial provinces, under the senate’s control and locally overseen by a proconsul. These included Achaia, Asia, Bithynia, Pontus, Crete, Cyprus, and Macedonia. Provinces whose commitment was weak or questionable, typically on the frontiers, were classified as imperial provinces, controlled directly by the emperor and governed by a legate or military prefect or procurator. These included Armenia, Britannia, Cilicia, Galatia, Germania, Hispania, Judea, and Syria. At times client kings were permitted administrative power.

During the Lord’s earthly ministry, his influence and teachings impacted lives as far north as Syria, as far east as the Decapolis and Perea, as far south as Idumea, and all in between.1 When the historical narrative of the book of Acts closes, the gospel has spread much farther in all directions, even to Rome. In most cases it appears that the initial spread of Christianity was in major cities, followed by expansion into surrounding rural areas (cf. Acts 17:1; 1 Thess. 1:8). Throughout his letters Paul makes particular reference to the Roman provinces of Macedonia, Achaia, Asia, and Galatia, in which he had focused a great deal of missionary attention;2 also Cilicia, Syria, Judea, Hispania/Spain, and Rome itself.3

The entire New Testament is situated in the context of the Roman Empire. The earthly life of Jesus, the history of the early church, each New Testament author and targeted audience, and every New Testament document presuppose the overshadowing presence of Roman dominion.