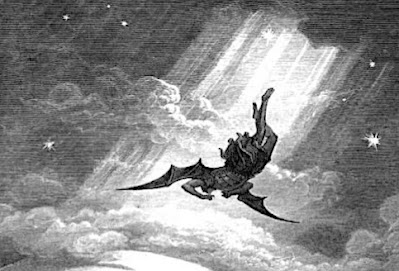 Isaiah’s prophetic career spanned more than four decades, during the reigns of four kings of Judah (ca. 740-698 BC) and the rise of the Assyrian empire. Along with a message of hope for the future, Isaiah issues warnings of impending judgment against the divided and dysfunctional kingdoms of Israel and Judah, as well as surrounding nations.

It has long been assumed that the name Lucifer applies to the devil, based on some translations of Isaiah 14:12 (notably Douay-Rheims, New/ King James versions). However, the context concerns the fall of the Babylonian king (v. 4), using various symbolic images. The Hebrew helel simply means “shining one” or “morning star,” with its Latin counterpart luciferus, “bringer of light.” This is not a proper name of the devil but metaphorically descriptive of Babylon’s arrogant ruler.

The first part of the prophecy depicts the collapse of the Babylonian empire and its despotic king, symbolized as a massive tree cut down and cast into the depths of Sheol (the pit of darkness, death, despair), while other “trees” (nations) rejoice, having been oppressed by the once-powerful Babylonians (vv. 4-11). Next the Babylonian monarch is pictured as a self-exalted heavenly star that is cast down to earth and into the depths of Sheol (vv. 12-15). The surrounding nations are at peace when Babylon falls, with the defeated despot pictured further as a despised branch, a bloody garment, and a desecrated corpse (vv. 16-21). The sure destruction of Babylon is a judgment of Yahweh (vv. 22-23), later carried out by the Medes and Persians.

Ezekiel was a 6th-century BC prophet among the Jewish exiles in Babylon, using parables and symbolic imagery to warn of impending judgment against the remaining inhabitants of Judah and other nations, including the Phoenician city-state of Tyre (26:1–28:19) and neighboring Sidon (28:20-24) on the northeast coast of the Mediterranean Sea. A message of doom is directed to the city of Tyre itself (chap. 26), followed by a lament for its downfall (chap. 27), then against Tyre’s ruler [Heb. nagad, not strictly a “prince” but the “commander”] (28:1-10), followed by a lament for the fall of Tyre’s ruler [Heb. melek, the “king”] (28:11-19).

The city of Tyre consisted of the mainland metropolis on the coast and its heavily fortified island city. Its ruler was guilty of boastful self-sufficiency and thought his island fortification “in the midst of the seas” (28:2), surrounded by the waters of the Mediterranean, was impregnable.

The biblical text does not identify Tyre as “Satan,” or anyone else other than the 6th-century BC city-state of Tyre and its leadership. Interpreters through the centuries have literalized Ezekiel’s symbolism and applied it to what they think happened to Satan, but their inferences are not clearly stated in the biblical record.

Seeming to parallel the story of Adam and his fall (Gen. 1–3), the description of the ruler of Tyre (Ezek. 28:11ff.) corresponds to his deified self-assessment (vv. 2-6). Ezekiel is figuratively portraying an environment of wealth, privilege, and security at the beginning of the ruler’s life, while still in his innocence. The imagery describes him as an anointed “cherub” dwelling in God's “garden” and “holy mountain,” i.e., enjoying divine favor and blessings (vv. 12-14). The king is then reminded that this state of perfection or innocence lasted until “iniquity was found in you” (v. 15). Consequently he was cast out of God's mountain (out of God's favor) to the ground, upon the earth, symbolizing his public defeat and humiliation (vv. 16-19).

This highly symbolic prophecy was historically fulfilled by the Babylonians and later the Greeks. Note also similar imagery likening the downfall of the Egyptian Pharaoh to that of Assyria (31:2ff., esp. vv. 8-9, 16).

The main subject of each prophecy is “a man” (Isa. 14:16; Ezek. 28:2, 9), not Satan or any other spirit being. The only way to get Satan’s fall out of these verses is to ignore the context and read into them what is not there. When understood properly, both passages confirm the divine inspiration and integrity of scripture as predictive prophecies that were in fact fulfilled in the chronicles of history.

Related Posts: The Devil's Names, Perfect in Your Ways (Ezek 28:15)