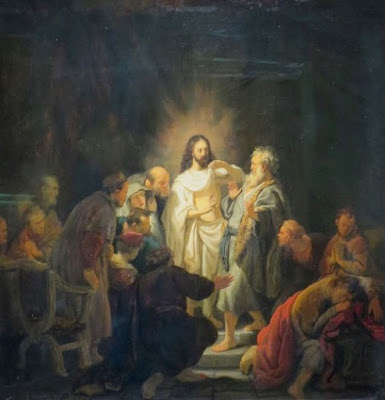 When Jesus arose from the dead, he appeared to his remaining apostles, one of whom recorded the following:

Then, the same day at evening, being the first day of the week, when the doors were shut where the disciples were assembled, for fear of the Jews, Jesus came and stood in the midst, and said to them, “Peace be with you.” When He had said this, He showed them His hands and His side. Then the disciples were glad when they saw the Lord. So Jesus said to them again, “Peace to you! As the Father has sent Me, I also send you.” And when He had said this, He breathed on them, and said to them, “Receive the Holy Spirit. If you forgive the sins of any, they are forgiven them; if you retain the sins of any, they are retained” (John 20:19-23, NKJV).

The apostles were not to receive the Holy Spirit until the Lord was glorified (John 7:39), and he was not glorified until after he had ascended into heaven (John 16:7; 17:1-5). The apostles were instructed to wait in Jerusalem for about ten days after Christ’s ascension in order to receive the outpouring of the Holy Spirit on the Day of Pentecost (Acts 1:1-12; 2:1-4).

When Jesus breathed on the apostles in John 20:22, he did not say, “You have received …” [perfect indicative] or “You are receiving …” [present indicative], but rather, “Receive [aorist imperative] the Holy Spirit.” This statement instructs the apostles to be receptive to the Spirit when he comes, but it does not specify when he came. Why, then, did Jesus breathe on them? John did not see fit to explain it, but there are at least a couple of plausible explanations.

Before breathing on these men, Jesus showed them his pierced hands and side (John 20:20). Luke’s account (24:36-49) reveals that when Jesus appeared to the apostles (to give the Great Commission) and said “Peace to you,” they were frightened, thinking he was “a spirit.” Jesus then showed them his crucifixion wounds to prove he was alive and in the flesh. John not only mentions the Lord showing his wounds but adds that he also breathed on them (20:19-23), perhaps to verify that he was really alive.

Since “breath” in the Bible corresponds to life (cf. Gen. 2:7; Mark 15:37), it may be that Jesus was also illustrating the life-giving nature of the apostles’ mission. In the previous verse the Lord had given them a commission, and in the subsequent verse he identified forgiveness of sins as part of their work. The gospel began to be preached, resulting in sins forgiven, and the Great Commission was launched when the Holy Spirit was received by the apostles on the Day of Pentecost (Acts 2:1-41).

Mark and Luke’s record of the crucifixion state that Jesus “breathed his last” (Mark 15:37, 39; Luke 23:46), a common idiom for physical death. Both Matthew and John describe the Lord’s death as, “he gave up his spirit” (Matt. 27:50; John 19:30). Perhaps John wanted to emphasize to his readers that Jesus’ last breath on the cross was not his final breath. There was more to come by the sending of God’s Spirit and beyond.