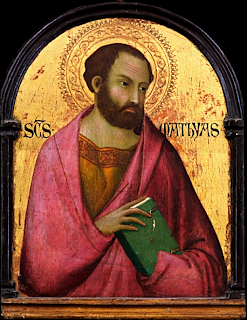 Matthias is first introduced in the biblical record in Acts 1:15-26, where he is gathered with about 120 believers in Jerusalem after Christ’s ascension and before the Day of Pentecost. He had been a devoted follower of Jesus since the time of John the baptizer’s ministry and was an eyewitness of the risen Lord. The 4th-century historian Eusebius, based on sources available to him at the time (Eccl. Hist. 1.12.3), affirms that Matthias was among the seventy disciples of Luke 10:1-17.

Long before Matthias is explicitly named, however, God had spoken of him through the prophet David. In view of the tragic demise of the apostle Judas, the divine will declared: “let another take his office” (Psalm 109:8 NKJV). The disciples had no way of knowing to which of their number this prophecy applied, but the Lord made it clear by selecting Matthias who was then “numbered with the eleven apostles” (Acts 1:20-26). Although this is the last time Matthias is mentioned by name in scripture, it is not the last time he is mentioned. From this point onward, in the recorded history of the early church, whenever we read of “the apostles” collectively, Matthias is almost certainly included.
He was present with his eleven comrades on the Day of Pentecost as they were all filled with the Holy Spirit and miraculously preached to foreign visitors in various languages (Acts 2:1-11). Matthias stood alongside Peter as the gospel was proclaimed (v. 14) and was among those asked by the convicted listeners, “Men and brethren, what shall we do?” (v. 37). When about 3,000 souls responded to the gospel invitation on this occasion (v. 41), Matthias would have been available to assist with the baptisms. He and his fellow apostles
continued teaching these new converts and evangelizing the lost, confirming the divine message with miraculous signs (vv. 42-43).
In the face of opposition from Jewish authorities, Matthias was involved in the fervent prayer session where he and his companions dutifully prayed for boldness to speak God’s word, receiving an immediate answer to their selfless request (Acts 4:23-31). With great power he bore testimony of the resurrected Christ whom he had personally seen (v. 33). He also helped distribute benevolent aid among the needy and even participated in giving the nickname to the one we affectionately remember as “Barnabas” (vv. 34-37).
The word of God successfully spread through the evangelistic efforts of Matthias and his co-workers, leading to their eventual arrest and incarceration by antagonistic Jewish leaders (Acts 5:12-18). Having been freed by an angel of the Lord, they went right back to preaching the gospel, only to be arrested again the next day and brought to trial (vv. 19-26). When sternly ordered not to teach anymore in the name of Jesus, Matthias joined his apostolic colleagues in responding: “We ought to obey God rather than men,” followed by a brief summation of the gospel message (vv. 29-32). Matthias came close to losing his life that day (v. 33), but in the end he and his associates were beaten, threatened, and then released (v. 40).
The Greek word used to describe this beating is a term that literally means to “flay” or “skin” (BAGD 175). According to Jewish law, the lashing was not to exceed forty blows (Deuteronomy 25:1-3), although for fear of miscounting and inadvertently transgressing the letter of the law, the rabbis limited the number to thirty-nine. Jews in the first century AD tended to inflict the maximum penalty (cf. 1 Corinthians 11:24). The offender was held flat on the ground by his hands and feet, and the beating was typically administered to the back with a wooden rod (Proverbs 10:13; 19:29; 26:3), although sometimes a whip of twisted strips of leather was employed (see C. F. Keil and F. Delitzsch, Biblical Commentary on the OT 3:421).
What effect did this horrific experience have on Matthias and his companions? “So they departed from the presence of the council, rejoicing that they were counted worthy to suffer shame for His name. And daily in the temple, and in every house, they did not cease teaching and preaching Jesus as the Christ” (Acts 5:41-42). Matthias carried on his faithful service of prayer and ministry of the word (6:4), even in the face of bitter persecution (8:1, 14; 9:1; 12:1). He was also involved in conflict resolution in the Jerusalem church (6:1-7; 15:6).
When Paul of Tarsus returned to Jerusalem in the spring of 57, he met with James and the elders instead of the apostles (Acts 21:18). This suggests that sometime between 50 and 57 Matthias left Jerusalem to carry out his ministry elsewhere, taking along his believing wife (cf. 1 Corinthians 9:5). According to tradition, he went on to spread the gospel in Judea, Cappadocia, and/or Ethiopia. Like the other apostles, he continued to face many dangers and hardships, risking his life to proclaim the good news to a lost and dying world. He endured hunger, thirst, lack of clothing, beatings, and homelessness, and not receiving the financial assistance he deserved, he worked with his own hands to support himself and his family (1 Corinthians 4:9-12; cf. 9:4-14). He was reviled, persecuted, defamed, and regarded “as the filth of the world, the offscouring of all things” (1 Corinthians 4:12-13). While traditions about him vary, they consistently affirm that Matthias ultimately suffered death as a martyr.
Lest we persist in overlooking the significant contribution of this great hero of faith, remember that Matthias, through his faithful apostolic ministry, played a crucial role in laying the foundation of the Lord’s church to which we are now privileged to belong (Ephesians 2:19–3:5). Though he never sought his own glory, this brief article is a humble attempt to give honor to a dedicated servant of Christ to whom honor is unquestionably due (Romans 13:7).
--Kevin L. Moore

Related Posts: Cross-bearing, Around the World in Three Decades