A Closer Look at Pharisaism 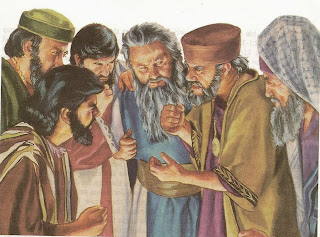 The Pharisees (the name meaning “separatists”) were a prominent Jewish sect who exercised significant influence among the people of Israel during the time of Christ and his apostles. They are probably best remembered for their antagonism against Jesus. Because of their infamous reputation, the label “pharisaical” has become a derogatory accusation often generating prejudicial feelings toward those to whom it is applied.
To set the record straight, not all Pharisees or pharisaic tendencies were bad. Since they correctly acknowledged God’s power to raise the dead (Acts 23:6-8; 26:5-7), they were prime candidates for the gospel. Many of them did become Christians (Acts 2:41; 15:5), the most notable of whom was Saul of Tarsus (Acts 23:6; 26:5). Joseph of Arimathea, a prominent member of the Jewish Supreme Court (Mark 15:43), may very well have been a Pharisee. He is described as “a good and just man,”1 who refused to consent to the Lord’s death (Luke 23:50-51). He and another Pharisee, Nicodemus, prepared the body of Jesus for burial in Joseph’s own tomb (Matthew 27:57-60; John 19:38-42). Both of them apparently became followers of Christ.2 A Pharisee named Gamaliel (Paul’s former teacher) dissuaded a murderous plot against the Lord’s apostles (Acts 5:33-40).
Because of their reputation for being meticulous students of God’s word, Jesus told the people, “whatever they tell you to observe, that observe and do …” (Matthew 23:3). Unlike Jonah of old, the Pharisees were extremely mission-minded, taking seriously their God-ordained role to ensure “that all peoples of the earth may know [his] name” (1 Kings 8:43). Their evangelistic fervor was noted by Christ when he said they “travel land and sea to win one proselyte” (Matthew 23:15). The Lord even endorsed their prudence in not leaving undone the minute details of the law (Matt. 23:23). Being “zealous toward God” (Acts 22:3) is an apt description of many Pharisees.
In spite of all these good qualities, however, the Pharisees in general still missed the mark. In Matthew 23 Jesus condemned their persistent failure to implement in their own lives what they taught others to do (vv. 3-4). They were characteristically arrogant, selfish, hypocritical, oppressive, pretentious, and inconsistent (vv. 5-22). They neglected the weightier matters of the law: justice, mercy, and faith (v. 23). They were internally impure, self-indulgent, and lawless (vv. 25-28). They were even guilty of persecution and murder (vv. 29-37). How is it possible, considering their apparent devotion to the law, that they could rationalize such gross disregard for the law?
The apostle Paul, a former Pharisee himself, in his epistle to the saints at Rome, may offer some insight. The Pharisees, like most other Jews, probably would not have denied their obvious infractions of the law. But as God’s chosen people (as they regarded themselves), their presumption was that, unlike the Gentiles, they would escape condemnation and they accordingly failed to recognize their need for repentance (Romans 2:1-5). They naively believed that their election, circumcision, and covenant protected them against the consequences of neglecting to fully observe the law (Romans 2:17-29; Philippians 3:4-6). Simply because they were Abraham’s descendants, despite all their willful transgressions, they blindly relied on God’s grace to save them (Romans 3:1–6:2).
The Pharisees were not denounced because of their “conservatism,” or their zeal for God and his law, or their emphasis on obedience, or their efforts to make converts. They were condemned, in short, because of their evil hearts and impure lives. They hypocritically said one thing and did another. They went beyond God’s law with their human doctrines and traditions and lived in blatant violation of divine precepts (Matthew 15:1-9). No wonder the charge “pharisaical” is such a burning indictment!
If you want to criticize someone for being, in your estimation, too “conservative,” the derogatory accusation “Pharisee” is misapplied. A Christ-like criticism would not be aimed at a person’s conscientious attempts to conserve the word of God. It would be directed toward hypocrisy, arrogance, oppression, impurity, and disobedience. Using God’s grace to excuse or justify one’s failure to live up to the divine standard is more pharisaical than seeking to understand, obey, and defend God’s truth.
Consider, for example, controversial issues such as divorce and remarriage.3 It is ironic that when one takes at face value the Lord’s instructions – accepting, observing, teaching and defending them without compromise – he runs the risk of being labeled “legalistic” or “pharisaical” because of his strictness and perceived lack of sympathy for those in unbiblical relationships (cf. Mark 6:18). The irony is that Jesus’ recorded discourses on the subject (Matt. 5:32; 19:4-9; Mark 10:6-12; Luke 16:18) are always in response (and opposition) to the lax attitudes of the scribes and Pharisees toward the divine will (Matt. 5:20, 31; 19:1-7; Mark 10:1-2; Luke 16:14-15). Searching for loopholes and twisting or watering down the Lord’s teachings is the pharisaic approach.

Healthy debate can be beneficial, but not when prejudicial labels are carelessly hurled at those with whom we disagree. I may be regarded as “legalistic” by those on my left and “liberal” by those on my right, but at the end of the day what do these epithets really communicate? They say more about those who apply them than about those to whom they are applied. If we can be more specific when addressing the inevitable concerns, reasoning together with open Bibles and open hearts, much good can be accomplished and unnecessary harm averted. May godly attitudes and Christian behavior prevail among the Lord’s people.
--Kevin L. Moore

Endnotes:
1 All scripture quotations in English are from the NKJV.
2 According to legend, Joseph of Arimathea was sent by the apostle Philip to Great Britain in 63 to establish the Lord’s church.
3 See Jesus on Divorce and Remarriage.

Related articles: Wes McAdams' You May Not Be Conservative; Ben Giselbach, When 'Book, Chapter, Verse' Becomes a Bad Thing