“Father, Into Your Hands I Commit My Spirit” 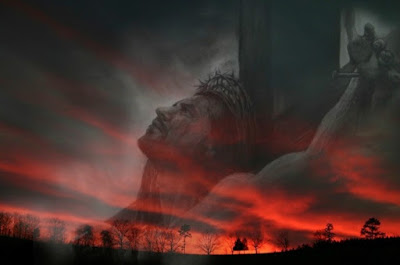 The Gospels record seven statements of Jesus as he was dying on the cross. Seeing that the crucifixion lasted approximately six hours (Mark 15:25, 33), it would appear that for most of the tortuous ordeal he suffered in silence, making the few words he spoke even more significant. Evidently there were occasions when he “cried out with a loud voice,” no doubt in agony, without verbalizing anything (Matt. 27:50; Mark 15:37). At least twice, however, he “cried out with a loud voice” using words, and both exclamations were scripture quotations. Might this suggest that of all he said from the cross, he especially wanted the word of God to be heard?
The first quote is from Psalm 22:1, “My God, my God, why have you forsaken me?” (Matt. 27:46; Mark 15:34).1 The second is from Psalm 31:5, “… into your hands I commit my spirit” (Luke 23:46). Jesus’ heart was clearly filled with the word of God, which was always ready on his lips.2 Both in life and in death he exemplified what has always been expected of God’s people: “But the word is very near you, in your mouth and in your heart, that you may do it” (Deut. 30:14). The focus of our present study is the Lord’s final statement before his death, recorded in Luke 23:46.
“Father”
The first word of this final declaration is “Father.” Interestingly, the very first recorded words of Jesus include a reference to his Father (Luke 2:49). Speaking Aramaic (Matt. 27:46; Mark 15:34), he would have employed the customary expression Abba (Mark 14:36), a term used in Aramaic-speaking homes, both by younger and older children, as an affectionate address. It was not merely a childish idiom comparable to “daddy” but a solemn, respectful term. Jesus’ language shows his submissive and reverential attitude and the close relationship he shared with his heavenly Father.
This Father-Son relationship began at the incarnation. Though existing in the form of God, Jesus humbled himself by taking on human flesh (John 1:1, 14; Phil. 2:5-8). In Luke’s account of the birth narrative, the angel Gabriel proclaims to Mary: “And behold, you will conceive in your womb and bring forth a Son, and shall call his name Jesus. He will be great, and will be called the Son of the Highest …. The Holy Spirit will come upon you, and the power of the Highest will overshadow you; therefore, also, that Holy One who is to be born will be called the Son of God” (Luke 1:31-35, emp. added). The future tense indicates that the Lord was recognized as “Son” in conjunction with his human conception and birth, not before.
Jesus as “the Son of God” implies both equality (of nature) and subordination (of role). Unlike his Jewish contemporaries, Jesus regularly referred to God in the exclusive sense as “my Father” (55 times in Matthew, Luke and John). Thanks to his example and sacrifice, we now can share in this special relationship and join him in exclaiming, “Abba, Father” (Rom. 8:15; Gal. 4:6).
“Into Your Hands”
When Jesus took on human flesh, he entrusted himself to his Father’s care. In life he submitted to the Father, and in death it was no different. When David had sinned and was given the choice of facing divine judgment, on one hand, or the wrath of his enemies, on the other, he declared: “I am in great distress. Please let us fall into the hand of the LORD, for his mercies are great …” (2 Sam. 24:14). David made this petition with confidence because he was remorseful and penitent and sought forgiveness and reconciliation. When one’s relationship with God is what it ought to be, it is very reassuring to be held in his grasp.
However, being in the hands of God is not always a comforting thought. “For if we sin willfully after we have received the knowledge of the truth, there no longer remains a sacrifice for sins, but a certain fearful expectation of judgment, and fiery indignation which will devour the adversaries…. It is a fearful thing to fall into the hands of the living God” (Heb. 10:26-31; cf. 12:29). For the impenitent sinner, falling into God’s hands is a terrifying prospect. Jesus suffered and died to take this fear away.
“I Commit”
The word here is paratíthēmi, meaning to “set before” or “entrust to.” It is most often used in scripture for setting a meal before others (Mark 6:41; 8:6, 7; Luke 9:16; 10:8; 11:6; Acts 16:34; 1 Cor. 10:27). The idea is that something one possesses or has in his control is freely given over to someone else. This means a personal decision must be made, implying free will. Jesus had a choice, and he chose to submit to the Father’s will. As he stated earlier in his ministry, “For I have come down from heaven, not to do my own will, but the will of him who sent me” (John 6:38; cf. 5:30; 8:29).
“My Spirit”
A human being is an immortal spirit housed in a mortal body (Jas. 2:26). At death the physical remains return to the dust (Gen. 3:19; Job 34:15; Psa. 104:29), whereas the spirit lives on into eternity (Eccl. 12:7; 1 Cor. 15:42-50; 1 Thess. 4:15-17). One’s future destiny is not random. Jesus decided in life where his spirit would go at death, and “… bowing his head, he gave up his spirit” (John 19:30). We have the same choice.
Conclusion
Jesus provides an example and an opportunity. “Father” is a reference to God that his children alone have the privilege to utter. “Into your hands” is a comforting thought only for those whose lives are right with him. The expression “I commit” reflects a personal decision that must be made. “My spirit” is indicative of God’s image in which we have all been made that abides forever (Gen. 1:26-27; John 4:24).
While our sins have separated us from God, Jesus has paid the price and offers reconciliation. Will I choose sin leading to death or obedience leading to righteousness?3 The decision will determine whether or not I can confidently say, “Father, into your hands I commit my spirit.”
--Kevin L. Moore

*Prepared for the Summer Series at Red Walnut Church of Christ 29th June 2016.

Related Posts: Cross-bearing: the Cost of Discipleship, What happens when we die?