The Production of a New Testament Document (Part 1 of 2) 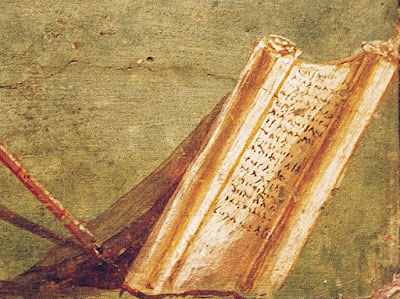 Writing materials
Materials used to transmit writing in antiquity included stone, wood, bone, clay and wax tablets, various metals, ostraca (potsherds), papyrus, and parchment (or vellum). Only the latter two were used for New Testament manuscripts. Papyrus was the most inexpensive and convenient writing material, and thus the more commonly used. It is almost certain that the original New Testament documents were written on papyrus.
The center section of the papyrus plant,1 growing primarily in the marshlands of Egypt along the Nile, was cut into thin strips laid side by side with a second layer added crosswise, then pressed together to form sheets of primitive “paper” (see Pliny, Natural History 13.74-82). The English word “paper” (via Old French) comes from the Latin papyrus, which is transliterated from the Greek papuros.
The center section (pith) of the papyrus plant was known as biblos or bublos, and the resulting sheet of writing material was called chartēs (from which we get the English word “chart”), mentioned in 2 John 12. A roll of papyrus sheets that contained a particular writing was also called biblos or biblion (from which we get the English words “bibliography” and “Bible”), and if a plurality of rolls were required for a particular work, each roll was called tomos (from which we get the English word “tome”).
Parchment (tanned animal skin) was used as a writing material from very ancient times but did not come into common use until the 3rd and 4th centuries AD. The term “parchment” is derived from the name Pergamum (a city in Mysia of Asia Minor), noted for its fine quality of parchment (pergamēnē) or vellum, which it manufactured and exported. The words “parchment” and “vellum” are sometimes used interchangeably, but vellum is a superior quality of parchment usually made of calfskin. For parchment the skins of cattle, sheep, goats, and antelopes were used.2 This writing material was more durable than papyrus and better suited for writing on both sides. Practically all of the extant New Testament manuscripts from the 4th–14th centuries are transcribed on parchment.
Writing Utensils
The type of writing instrument was generally determined by the material upon which the writing was done; e.g., a stylus (made of metal, ivory or bone with a pointed end) was commonly used on wax tablets. The reed pen (kalomos) was the standard writing utensil throughout antiquity, particularly for papyrus and parchment documents, mentioned in 3 John 13. The earliest reed pens were frayed at the end like a brush, but later they had a sharpened point with a split. Virtually all extant papyrus manuscripts of the New Testament were written with a reed pen.3
Black ink (melan) was typically used (2 Cor. 3:3; 2 John 12; 3 John 13).4 It was made in one of two ways: charcoal or soot or lamp-black and gum were dissolved in water, or nut-galls were ground and mixed with other ingredients to form a black ink, although it would eventually fade into a rusty-brown color (as in Codex B and Codex D). A nut-gall is “a curious ball-like tumor, about the size of a small marble, that grows mainly on the leaves or twigs of oak trees. It is formed when the gall wasp lays its egg in the growing bud of the tree and a soft, pale green, apple-like sphere begins to form around the larva” (B. M. Metzger and B. D. Ehrman, The Text of the NT 10). Later additional colors were used (mostly for decorative purposes), including red, gold, silver, brown, blue, yellow, and purple.
Other tools included bronze and earthenware inkwells, a knife for sharpening or making a new pen, a sponge for erasing mistakes or cleaning the pen, and a pumice stone for smoothing the writing surface.
Conclusion
In order for God’s revealed word to be available through the centuries, it needed to be transmitted in written form. Biblical writers used the materials available at the time to disseminate and preserve the divine message. This, in conjunction with the providential working of God, has ensured that “the word of the LORD endures forever” (1 Pet. 1:23-25).
--Kevin L. Moore

Endnotes:
1 “The plant has a root as thick as a person’s arm and tapers gracefully up with triangular sides …” (J. Murphy-O’Connor, Paul the Letter-Writer 4). “Its broad root stretches horizontally under the mud, and from this rise several strong stalks, triangular in cross section; short brown leaves protect the base…. growing to a height of 12 or 15 feet. At its top the stalk splits into a mass of strands (the umbel), and at the end of these the plant produces small brown flowers. The stalk of the papyrus plant has a tough green rind that contains an ivory white pith …” (B. M. Metzger and B. D. Ehrman, The Text of the NT 4).
2 For a good description of the process of making parchment, see B. M. Metzger and B. D. Ehrman, The Text of the NT 9-10.
3 The Egyptian reed pens were mostly the hollow tubular-stems of marsh grasses, especially from the bamboo plant, that served as a primitive form of a fountain pen. One end was cut into the form of a pen nib or point, ink filled the stem, and the reed forced the fluid to the nib. The quill pen was introduced later and eventually replaced the reed pen for writing on parchment.
4 The Hebrew word for ink is deyo because of its blackness (cf. Jer. 36:18). There is uncertainty as to whom the invention of ink is to be attributed, whether the Egyptians, the Chinese, the Babylonians, or the Phoenicians.

Related Posts: The Production of a NT Document Part 2, Divine Revelation and Inspiration of the Scriptures