The Sociocultural Context of the New Testament (Part 8): Public Reading 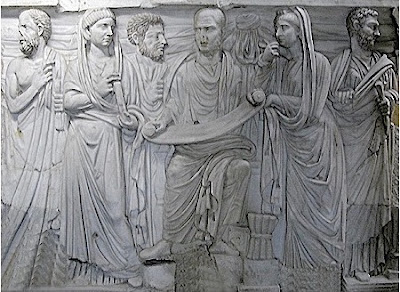 From earliest times the Jews gave attention to the public reading of God’s word (Exod. 24:1-7; Josh. 8:30-35; 2 Kings 22:8-13; 23:1-3; Neh. 8:1-9, 18; 9:3; 13:1). In fact, Hebrew narrative, which comprises more than 40% of the Hebrew Bible, was “designed primarily for hearers, not readers.... these texts were composed altogether with the hearer in view and thus contain structural features designed to make the narrative more memorable.”1  In the 1st century AD public reading was a regular part of the synagogue gatherings, where both the Law and the Prophets were read aloud (Acts 13:15, 27; 15:21). Jesus customarily attended synagogue meetings and participated in the communal reading and exposition of the sacred writings (Luke 4:16-22).2

Paul commends the holy scriptures to Timothy, charging him to “preach the word” (2 Tim. 3:16–4:2) and “to give attention to the public reading [anágnōsis]” (1 Tim. 4:13; cf. Acts 13:15; 2 Cor. 3:14). At the time, in addition to the Old Testament, the writings of Luke were already regarded as “scripture” (1 Tim. 5:18), and within a comparable timeframe so were Paul’s (2 Pet. 3:15-16) [see What the Scriptures Say]. In the earliest extant Pauline document, the directive is given: “I solemnly charge you [in] the Lord, [that] this letter be read to all the brethren” (1 Thess. 5:27). Seeing that the Thessalonian correspondence would naturally have been read publicly when the Thessalonica church assembled together, the exhortation potentially includes the nearby brethren in Berea and Philippi and beyond (cf. 1:7-8; 4:10). Paul intended for his writings to be circulated rather than kept isolated in their respective localities: “and when this letter shall be read in your presence, have it also read among the church of [the] Laodiceans, and that also you may read the [one] from Laodicea” (Col. 4:16) [see Paul's Missing Letters].

By the mid-2nd century Justin Martyr writes from Rome, “And on the day called Sunday, all who live in cities or in the country gather together to one place, and the memoirs of the apostles or the writings of the prophets are read, as long as time permits …”5 E. Ferguson remarks,“The Gospels and Prophets may have been a Christian counterpart to the Jewish readings from the Law and the Prophets…. the reading may have been continuous from Sunday to Sunday, taking up where the reading left off the last week, but not of a predetermined length. The indication is that the readings were rather lengthy ...”6

P. F. Esler provides helpful insights into examining the New Testament writings as they were originally designed. He reminds us that the author of each inspired document has communicated with the aim of informing and motivating a particular group of Christ-followers, most of whom potentially were illiterate. Since the text would have been read aloud when the church gathered, the message was conveyed orally and received aurally. It is therefore appropriate to consider the 27 New Testament documents as nonliterary in character, “as scripts for oral performance delivered within a setting of face-to-face dialogue …”7

Conversely, when modern readers in literary cultures interact with the written text, the tendency is to read and examine each word but fail to hear the words collectively as interpersonal discourse. “The omnipresence of printed text in our lives as a result of Gutenberg’s fifteenth-century invention of the printing press represents quite an obstacle to our understanding and benefiting from these communications in a manner that accords with their original and oral and interpersonal nature.”8 Esler challenges us to pay attention to the biblical author’s “communicative intentions” and listen to the New Testament “in a way that does justice to its oral and interpersonal origins.”9