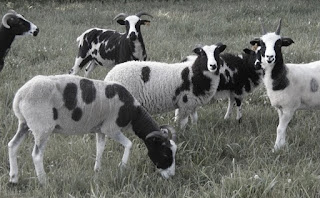 After 14 years of serving his father-in-law Laban and significantly increasing Laban’s wealth, Jacob requested all the speckled, striped, spotted, and black livestock as payment so that a clear distinction could be made between what was his and what was his father-in-law’s. Laban deceptively agreed, but then removed the speckled, striped, spotted, and black animals from the flocks that Jacob pastured. In response, Jacob devised an unusual breeding technique to increase his own flocks. “Then Jacob took fresh sticks of poplar and almond and plane trees, and peeled white streaks in them, exposing the white of the sticks. He set the sticks that he had peeled in front of the flocks in the troughs, that is, the watering places, where the flocks came to drink. And since they bred when they came to drink, the flocks bred in front of the sticks and so the flocks brought forth striped, speckled, and spotted...” (Gen. 30:37-39, 41 ESV).

Whether this was a local custom or Jacob’s innovation, it is not a scientifically proven method that works. But that’s not the point of the text. Jacob understood that God was the one working behind the scenes to make this happen (Gen. 31:9-12), so the sticks, perhaps a diversionary ploy to confound Laban, merely complemented what the Lord was doing rather than causing it to happen.

God had already promised to bless, protect, and prosper Jacob and his family (Gen. 28:13-15). Sometimes miraculously, sometimes providentially, the Lord kept his word. In spite of our sometimes ridiculous schemes, that’s the kind of God we serve.

Related Posts: How many times can Egyptian cows die?