If Jesus is God, to whom did he pray? 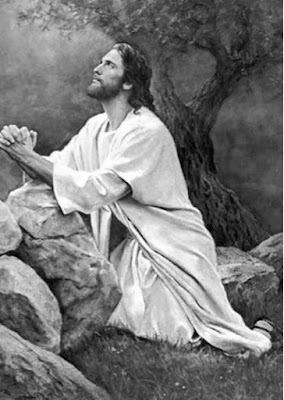 This question was asked of an incarcerated brother in Christ by a fellow inmate attempting to challenge his faith. The brother requested help with a simple response to what appears to be a perplexing issue. The question itself, when asked in a disparaging and condescending manner, demonstrates a misconception of the God of the Bible. The idea of “God” as a solitary entity or single mathematical unit is overly simplistic, as if he were a cartoonish white bearded old man in the clouds. It would be comparable to asking, if Kevin is man (human) and his father is man (human), how can man speak to man?

Seeing that the word “man” doesn’t imply that humanity is comprised of a single person, the fundamental question is whether or not the Bible indicates a plurality within the one God. The Unitarian concept of God is a single divine personage, while the Trinitarian concept is one God (the Divine Nature) consisting of three distinct personages (the Father, the Son, and the Holy Spirit) in perfect unity. In Gen. 1:26 God speaks of himself using plural pronouns: “us,” “our” (cf. 3:22; 11:7). What does this indicate about God? The Hebrew word translated “God” in Gen. 1:1-31; 2:2-22; 3:1-23, etc. is elohim (the plural form of el), found 2,570 times in the Hebrew scriptures. This plural form, in reference to Almighty God, is used with singular verbs and adjectives throughout the OT, more clearly revealed in the NT.

Jesus, as God (equal member of the Godhead, possessing the divine nature), willingly took on human nature and flesh—the incarnation (John 1:1-14), thereby placing himself in subordination to God [the Father] (Phil. 2:5-9) to whom he prayed while on earth (John 17:1ff.; etc.). All passages dealing with Christ’s subordination (1 Cor. 11:3; etc.) refer to his role in the flesh but do not detract from his divine essence. The descriptive expression, “the Son of God,” signifies both subordination (of position) and equality (of nature); cf. John 5:17-18; 10:17-33.

Attempting to simplify something as complex as God is quite a challenge. We could begin with a biblical definition of God as “the Divine Nature” (Acts 17:29), comprised of the Father, the Son, and the Holy Spirit (Matt. 28:19). Jesus became human (John 1:14), and as such he prayed to the heavenly Father (Matt. 26:39).