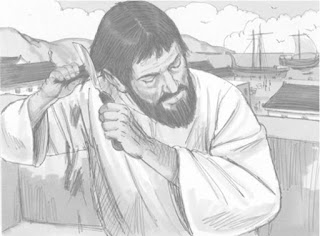 The first mission to Corinth was not easy, involving resistance, antagonism, hardship, and fears.1 Nevertheless, after at least eighteen grueling months of the Lord working through the faithful efforts of Paul, Silas, Timothy, Aquila and Priscilla, a community of Christ followers stood in this predominantly pagan city (1 Cor. 1:2; 2 Cor. 1:1). When Paul and his fellow-tentmaking coworkers left Corinth, they briefly stopped in the city’s southeastern seaport of Cenchrea, where Paul cut the hairs of his head, probably cut short (keírō) rather than completely shaved (zuráō),2 as part of a vow he had taken (Acts 18:18).
In ancient Judaism there were certain customs, rituals, and ceremonies involving the removal of one’s hair,3 perhaps most notably the Nazarite vow (Num. 6:1-21). However, Paul’s haircut at Cenchrea was unlikely connected to the Nazarite vow, which would have required the burning of the hair in the presence of a priest in the Jerusalem temple. In ancient Judaism there were any number of personal vows or solemn pledges to God any Jewish person could make, which were entirely voluntary albeit regulated (Deut. 23:21-23).

Even though Paul, as a Christian, was free from the Law of Moses, he was still an ethnic Jew and maintained certain aspects of his cultural heritage (Acts 16:3; 21:20-24; 22:17; 28:17; 1 Cor. 9:20). Moreover, the transition from old covenant Judaism to Christ’s new covenant system was not instantaneous but involved the gradual unfolding of divine revelation until the New Testament was completed. Paul, as a Jewish Christian, lived during this transitional period. His vow and haircut at Cenchrea, perhaps in response to the Lord’s providential protection in Corinth, were indicative of his background and ethnic heritage rather than his Christian faith.