Music and the Bible: A Brief History 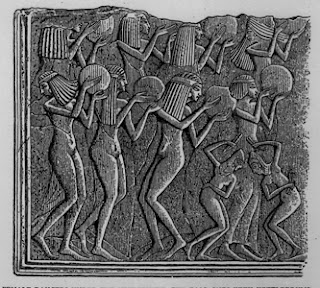 As music is traced through the Bible and beyond, some interesting facts come to light. A distinction can be seen between secular and religious music, and between vocal and instrumental music, but in modern times these distinctions are often blurred and unrecognized. What can we learn from history that might help ensure the kind of music offered to God in our worship is both acceptable and pleasing to Him?
Secular and Pagan Music:
Jubal, in the midst of a godless civilization, was "the father of all those who play the harp and flute" (Gen. 4:21). Laben, an idol worshiper (Gen. 31:19, 30), used "timbrel and harp" on special occasions (Gen. 31:27). The wicked in Job’s day would "sing to the tambourine and harp, and rejoice to the sound of the flute" (Job 21:12). Idol worship in Babylon was accompanied by musical instruments (Dan. 3:5, 15; cf. Isa. 14:11).
Music Among the Jews:
While singing appears to have been an important part of Israel’s worship from earliest times (cf. Job 35:10; Exod. 15:1-2; Num. 21:17; Judg. 5:1, 3; 2 Sam. 22:1, 50; 1 Chron. 6:31), the use of instruments of music was something adopted later in their history. After centuries among the Egyptians, when the Jewish people were finally delivered, Miriam and Israelite women went out "with timbrels and dances" (Exod. 15:20), and this came to be a customary form of celebration among the Jews (cf. Judges 11:34; 1 Sam. 18:6; Luke 15:25). When Saul was reluctantly anointed king, it seems that musical instruments accompanied the subsequent prophesying, or perhaps the previous animal sacrifices on the high place (1 Sam. 10:5; cf. 9:12). David was a skillful harp player (1 Sam. 16:16-23) and appears to have introduced musical instruments into Israel’s corporate worship (1 Chron. 15:16; 23:5; Ezra 3:10). There is some question, however, if this was ever approved by God (cf. Amos 6:3-5). As Solomon considered all his vain works and pleasures "under the sun" (i.e. apart from God), he included among them having acquired, in the Hebrew language, shiddâ we-shiddôh (Eccl. 2:8). This is the only occurrence of this expression in the Bible and its meaning is uncertain. While some English translations render it "many concubines," others say "musical instruments of all kinds."

Early Christianity:
Despite what had become a common Jewish practice (except in the synagogues where no musical instruments were used), the New Testament only records Jesus and His apostles singing, with no mention of instrumental music (Matt. 26:30; Mark 14:26; Acts 16:25; 1 Cor. 14:15). The church was instructed to simply sing and make melody in the heart to the Lord (Rom. 15:9; Eph. 5:19; Col. 3:16). Singing is the only kind of worship-music authorized in the New Testament (Heb. 2:12; 13:15; James 5:13), and church history attests to only a cappella music (unaccompanied singing) in Christian worship for several hundred years after the time of Christ.
Later Church History:
According to ecclesiastical history, Pope Vitalian I introduced the organ into the worship of the Roman Catholic Church in AD 666, although it was not commonly used until much later (M’Clintock and Strong, Cyclopedia of Biblical, Theological, and Ecclesiastical Literature 7:425; 8:739). Early Reformation leaders, such as John Calvin, John Wesley, Theodore Beza, John Knox, and Martin Luther, opposed the use of musical instruments in worship, primarily because they considered it a Roman Catholic innovation. By the 1800s, however, after ample protest, most Protestant denominations had adopted the practice.
With the desire and determination to restore pure New Testament Christianity, the leaders of the early Restoration Movement rejected all human innovations, including the use of mechanical instruments of music in Christian worship. They considered it to be one of many unauthorized papal, denominational, and worldly corruptions of the simple New Testament pattern.
Absent from the New Testament is the practice of worshiping God with musical instruments. Since it is so common-place in today’s religious world, the natural question is: by whose authority was it established? The options are: ancient paganism and worldliness, Jewish worship, Roman Catholicism, or personal preference. However, if the Lord’s revealed preference is considered and the new covenant of Jesus Christ is the basis of one’s faith, there is clearly no divine sanction for it.
–Kevin L. Moore
Originally appearing in The Exhorter (Oct.-Dec. 1999) and republished in The Summit Chronicle 8:1 (March 2008): 15 http://www.churchofchrist.org.nz/assets/summitchronicle/Summit_Chronicle_Issue8.pdf