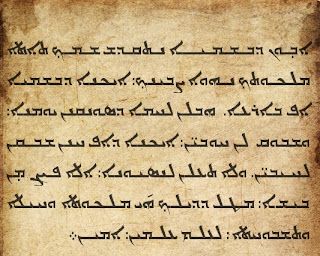 Aram, son of Shem (Genesis 10:22-23), founded the nation of Aram, which was later known as Syria. The language that developed among these people was Aramaic (Heb. אֲרָמִ֔ית or ‘Araamiyt; rendered “Syrian” in the KJV), a Semitic language closely related to Hebrew, having a similar alphabet but spoken differently (cf. 2 Kings 18:26; Isaiah 36:11). Abraham’s immediate descendants spoke Hebrew, whereas Aramaic was used by Laban, the grandson of Abraham’s brother (Genesis 31:47). A form of Aramaic came to be the common language of the Assyrians, the Babylonians, and the Persians (cf. Ezra 4:7; 2 Kings 18:17, 26), viz. East Semitic in contrast to the Northwest Semitic that developed among the Jews.
Prior to their exile, the soon-to-be Jewish captives were to learn the following statement in the Aramaic tongue in order to communicate it to their Babylonian captors: “The gods that have not made the heavens and the earth shall perish from the earth and from under these heavens” (Jeremiah 10:11).1 The more capable Judean prisoners were taught to speak Aramaic (Chaldean) immediately (Daniel 1:4), and during and after the 70-years' Babylonian exile the Jews adopted the Aramaic tongue as their own. While the majority of the Old Testament was written in Hebrew, large portions of Ezra (4:8–6:18; 7:12-26) and Daniel (2:4b–7:28) appear to have been written in Aramaic.2
By the time of Christ, although Hebrew continued to be used among the rabbis in Jerusalem, Aramaic had replaced pure Hebrew as the everyday vernacular of the Palestinian Jews (cf. Acts 1:19). Jesus could read and understand Hebrew (Luke 4:16-21), but he apparently spoke Aramaic (cf. Mark 5:41; 7:34; 15:34; Acts 26:14). When Hebraisti (“the Hebrew language”) is mentioned in the New Testament, it most likely refers to Aramaic as the spoken language of the Hebrew people at this time (John 5:2; 19:13, 17, 20; Acts 21:40; 22:2; 26:14; Revelation 9:11; 16:16).
Though written in koinē Greek, the respective Gospels of Matthew, Mark, and John employ Aramaic expressions.3 Mark and John go on to translate the words into Greek, which indicates both evangelists were communicating to non-Aramaic-speaking audiences. Matthew, on the other hand, mostly leaves these words untranslated, which suggests his readers were (or at least included) Aramaic-speaking Jews.4 Luke, however, omits most of the Aramaic terms altogether,5 and his third-person reference to Aramaic as “their own language” (Acts 1:19) implies that neither he nor his readership were Aramaic speakers.
The apostle Paul was bilingual,6 fluent in both Aramaic (the heart language of his ethic kinsmen) and Greek (the lingua franca of the Roman Empire) (Acts 21:37, 40; 22:2; cf. 26:14). In Paul’s extant writings, Aramaic expressions are occasionally employed (Romans 8:15; 1 Corinthians 16:22; Galatians 4:6), and he almost always refers to Peter by the Aramaic name Cephas (1 Corinthians 1:12; 3:11; 9:5; 15:5; Galatians 1:18; 2:9, 11, 14) – textual variation notwithstanding.7
Syriac, an Aramaic dialect, was the language of the inhabitants of eastern Syria and northern Mesopotamia. Not only were there Parthians, Medes, Elamites, and Mesopotamians present on the Day of Pentecost (Acts 2:9), the Lord’s church was well established in Syria before the mid-first century (Acts 9:19; 11:19-26; 13:1-3). According to tradition, the apostles Thomas and Thaddeus took the gospel beyond the eastern borders of the Roman empire,8 and under King Abgar IX (ca. 190-206) Christianity became the official religion of the Parthian kingdom. By 225 churches were established throughout the Tigris-Euphrates valley, from the Caspian Sea to the Persian Gulf.
Syriac-Aramaic was the first language into which the Greek New Testament was translated, and Tatian, an Assyrian convert who studied under Justin Martyr in Rome, produced a harmony of the four Gospels known as the Diatessaron in the Syriac language (ca. 150-170). In fact, Syriac became the common language among Christians in eastern Syria, Mesopotamia, Persia, and eventually India, Mongolia, and China. The Nestorian Monument, erected in 781, commemorates the arrival of Christianity into the capital of China in 635 and contains both Syriac and Chinese inscriptions. Two Christian cemeteries in Kyrgystan, dating from the eighth to the thirteenth centuries, have inscriptions on tombstones in both Syriac and Turkish.
While God is omnilingual, a variety of languages have been used through the ages to communicate and accomplish the divine will among God’s human creation. Most students of the Bible are aware of the significance of Hebrew and koinē Greek, but Aramaic has also played a crucial role. It functioned as a suitable conduit of God’s revelation and the original teachings of Christ, as well as an effective evangelistic tool among pre-Christian Jews, Jewish Christians, and later Eastern Christians. “There are, it may be, so many kinds of languages in the world, and none of them is without significance. Therefore, if I do not know the meaning of the language, I shall be a foreigner to him who speaks, and he who speaks will be a foreigner to me” (1 Corinthians 14:10-11).
As we continue the monumental task of taking the gospel into all the world, may we exercise diligence in contextualizing the message and clearly communicating it so that God's will can most effectively be accomplished in the lives of all who receive it (Isaiah 55:11).
--Kevin L. Moore

Endnotes:
1 All scripture quotations are from the NKJV.
2 Aramaic is also the primary language of the Jewish Talmud. The Dead Sea Scrolls reveal that Jewish Aramaic was unique and related to the Hebrew script.
3 Matthew 5:22; 6:24; 16:17; 27:33, 46; Mark 3:17; 5:41; 7:34; 14:36; 15:22, 34; John 1:42; 20:16.
4 See Matthew's Audience, Mark's Audience, Luke's Audience, John's Audience.
5 For example, the place of Jesus’ execution is referred to by its Aramaic name Golgotha in Matthew, Mark and John, whereas Luke simply uses the Greek designation Chranion (“Skull”). Note that it was the Latin calvaria that influenced the KJV’s rendering “Calvary.” Besides Acts 1:19, Luke's only other employment of an Aramaic (Syriac) term is "mam[m]on" in his record of Jesus' speech in Luke 16:9, 11, 13.
6 Technically, with his miraculous gift of tongue-speaking (1 Corinthians 14:18), Paul would have been multilingual as circumstances necessitated. See Speaking in Tongues.
7 In the Corinthian correspondence, the Aramaic "Cephas" is used exclusively. In Galatians Paul alternates between the Aramaic and Greek names, but texts vary among the manuscripts in 1:18 and 2:7-14 ("Cephas" 1x/"Peter" 5x in NKJV vs. "Cephas" 4x/"Peter" 2x in NASB).
8 See Eusebius, Eccl. Hist. 1.13.4-22; 3.1.1. The early third-century Acts of Thomas, telling of the missionary journey of Thomas to India, was written in Syriac and first circulated in Edessa before it was translated and more widely distributed.