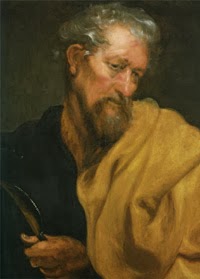 The name Bartholomew (Greek Bartholomaios) is from the Aramaic bar-Tôlmai, meaning “son of Tolmai.”1 Bartholomew is mentioned by name in the New Testament only in the four lists of the apostles (Matt. 10:3; Mark 3:18; Luke 6:14; Acts 1:13) and is usually paired with Philip. He is unnamed in the Gospel of John, wherein Philip is associated with Nathanael (1:43-49). Also in John’s record Nathanael is in the company of other apostles (21:2) and among the eyewitnesses of the resurrected Christ (21:3-14) but not identified in the Synoptics. Seeing that the name Bartholomew is actually a patronymic or surname that requires a personal name too (like “Simon bar-Jonah”), it stands to reason that the apostle Bartholomew is Nathanael bar-Tolmai.
Nathanael (Bartholomew?) was informed by Philip that the long-anticipated fulfillment of scripture’s messianic prophecies had at last been realized in “Jesus of Nazareth, the son of Joseph” (John 1:45). This prompted Nathanael’s notorious remark, “Can anything good come out of Nazareth?” (v. 46). Nathanael’s prejudiced mindset was probably due to the fact that he was from the nearby Galilean town of Cana (John 21:3) and would no doubt have been familiar with what appears to have been Nazareth’s disreputable status at the time. Nazareth was a small, obscure village secluded in the hills of Galilee that was never mentioned in the Old Testament or in the writings of Josephus or in any other extant Jewish sources prior to the 3rd century AD. While population estimates vary, in Jesus’ day the number of residents could have been fewer than 500.2 Nathanael’s pessimistic observation, coupled with the opposition and violence Jesus faced there,3 may also suggest a comparatively wicked environment.
As far as Nathanael was concerned, Jesus was an unlikely person from an unlikely place. As it turns out, however, Nathanael’s preconceptions were misconceptions. The sensible and practical advice of Philip was simply, “Come and see” (John 1:46b).4 Rather than relying on biased assumptions, Nathanael needed to open his eyes and heart to what the Lord has to offer. Jesus describes Nathanael as “an Israelite indeed, in whom is no deceit” (John 1:47), comparable to later descriptions of Saul of Tarsus (2 Cor. 11:22; Phil. 3:5-6).
A basic demonstration of the Lord’s supernatural foresight moved Nathanael to acknowledge Jesus as “the Son of God … the King of Israel” (John 1:49). Yet Nathanael was assured by Christ, “You will see greater things than these” (v. 50b). The implication is that Nathanael would be a loyal disciple of Jesus, accompanying him during his earthly ministry and witnessing many wondrous works. Being from Cana of Galilee, Nathanael was most likely present when the Lord performed his first miraculous sign there (John 2:1-11), and Nathanael would also be afforded opportunities to see amazing things like lepers cleansed, the lame walking, the deaf hearing, the blind seeing, and the dead brought to life (Luke 7:22; etc.).
According to tradition the apostle Bartholomew traveled as far east as India, leaving behind a copy of Matthew’s Gospel (Eusebius, Eccl. Hist. 5.10), and also proclaimed Christ in Armenia (with Thaddeus Judas), Mesopotamia, Parthia, Lycaonia, and Ethiopia. He is believed to have died as a martyr in Armenia by being flayed alive and then beheaded or crucified upside down.5
Most of us wrestle with deep-seated presuppositions that have the potential of blinding us to the truth. Like Nathanael/Bartholomew, we ought to be persons of integrity and heed the simple admonition, “Come and see.” With open minds and hearts, as we give honest consideration to the available evidence, conviction will surely follow. And by stepping out in faith and taking the Lord at his word, our faith will inevitably grow stronger as we experience his providential working in our lives. Like Nathanael/Bartholomew, may we faithfully continue in the service of God even unto death.
--Kevin L. Moore

Endnotes:
1 It has been suggested that the name Tolmai might be linked to the ancient Greek name Ptolemy.
2 See E. Meyers and J. Strange, Archaeology, the Rabbis, and Early Christianity (Nashville: Abingdon, 1981); cf. “Nazareth” in the Anchor Bible Dictionary (New York: Doubleday, 1992).
3 Cf. Matt. 13:53-58; Mark 6:1-6; Luke 4:16-30. Both the purpose and the experience of Christ on earth (Matt. 9:11-13; Heb. 4:15) would add credence to the prospect of Nazareth having been a somewhat depraved environment.
4 This was a common rabbinic formula (particularly in the Talmudic writings and the rabbinic commentaries on the Torah known as the book of Zohar), conveying the principle of seeking together for a solution.
5 In later artistic impressions he is depicted with a flaying knife; in Michelangelo’s Sistine painting of the final judgment, the flayed Bartholomew is holding his own skin.