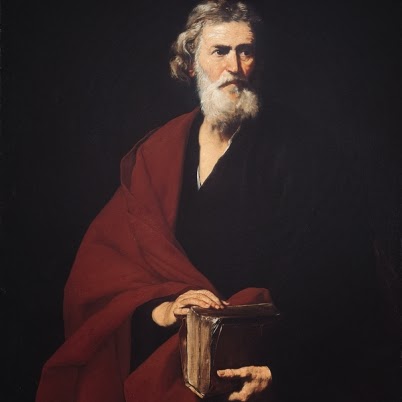 The apostle Matthew is also known as Levi, son of Alpheus (Mark 2:14; Luke 5:27),1 whether Levi is a personal name or a tribal designation.2 The name Matthew (Hebrew Mattityahu, Greek Matthaios) means “Gift of Yahweh.”3 He was a telōnēs (tax collector or revenue officer) from Capernaum in Galilee (Matt. 9:9; 10:3), probably gathering revenue for the tetrarch Herod Antipas.4 “There was never a more unlikely candidate for the office of apostle than Matthew” (W. Barclay, The Gospel of Matthew 1:329).
The story of Matthew’s call to discipleship is documented in Matt. 9:9-13; Mark 2:13-17; and Luke 5:27-32. He was afforded the opportunity to hear Jesus preaching near the coast of the Sea of Galilee, where the tax office was located. Having accepted the invitation to join the Lord’s band of followers, Matthew hosted a banquet in his house for the Lord (Luke 5:29), perhaps functioning as a going-away celebration for Matthew’s upcoming adventure as an apostle. Other tax gatherers were present along with a group described as hamartōloi (“sinners”).5 The Lord’s justification for associating with these dodgy characters was threefold: (a) like a physician aiding the sick, these were precisely the type of persons he ought to have consorted with; (b) it is God’s desire to extend mercy to those who need it (Hosea 6:6); and (c) Christ’s message of repentance (cf. Matt. 4:17; 11:20-21; 12:41) is exactly what sinful people need to hear (Matt. 9:11-13; Luke 5:32). Thanks to Matthew’s extensive connections and his intermediary role, a number of tax collectors and sinners became penitent followers of Jesus (Mark 2:16).
Matthew is one of only two apostles to have authored a Gospel,6 and his humble character is indirectly revealed therein. The host who gave the feast for Jesus is not identified by Matthew (9:10), whereas Luke explicitly (5:29) and Mark implicitly (2:15) recognize Matthew [Levi] himself as the host. In the listings of the apostles according to Mark and Luke, “Matthew and Thomas” appear as the fourth pair, whereas the order is reversed in Matthew’s record. And it is only in Matthew’s list that reference is made to “Matthew the tax collector” (10:3), which is intriguing, seeing that tax collectors were particularly despised among the Palestinian Jews of his day (see 5:46, 47; 9:10-11; 11:19; 18:17).7 This would be comparable to Paul’s recollections of his own sordid past (Acts 22:4; 1 Cor. 15:9; 1 Tim. 1:13; etc.), which served to deepen his appreciation of God’s grace while motivating him to continued faithfulness in the service of Christ. Matthew knew firsthand what it was like to be detested, disparaged, and ostracized as an outcast in orthodox Jewish society but still accepted and loved by the Lord anyway.
Considering his background, Matthew would have been accustomed to writing and reasonably fluent in both Aramaic and Greek. This would explain the “Jewishness” of his Gospel, his proficiency in the Greek language, and his attention to detail.8 In the dispute over paying taxes, Mark (12:15) and Luke (20:24) use the common term dēnarion, whereas Matthew alone (22:19) uses the more precise nomisma (state coin), indicative of a tax gatherer’s experience. A number of financial transactions are depicted in Matthew’s Gospel (17:24-27; 18:23-35; 20:1-16; 26:15; 27:3-10; 28:11-15).
Beyond his ministry in Judea, there is no definitive record of where else Matthew labored for the Lord or how he died. It is commonly believed that he went on to preach the gospel in other countries and eventually suffered death as a martyr (cf. Eusebius, Eccl. Hist. 3.24.6). William Barclay observes, “He lost a comfortable job, but found a destiny. He lost a good income, but found honour. He lost a comfortable security, but found an adventure the like of which he had never dreamed” (The Gospel of Matthew 1:331).
As an apostolic representative of God’s Son, surely Matthew was a dubious candidate. But Matthew went on to prove that no one is incapable of meaningful transformation under the influence and guidance of Jesus Christ. Matthew’s disreputable past neither kept him down nor held him back. In fact, the following sentiment from Paul could just as easily have been written by Matthew: “For I am the least of the apostles, who am not worthy to be called an apostle …. But by the grace of God I am what I am, and His grace toward me was not in vain …” (1 Cor. 15:9-10 NKJV).
Despite the aberrant lifestyles and seedy reputations of Matthew’s friends and associates, by introducing them to Jesus, Matthew contributed to lives being changed, souls being saved, and the Lord’s flock increasing. Through the Gospel he penned, Matthew has aided generations of readers in getting to know Jesus, coming to adore Jesus, and obeying all things that Jesus has commanded (28:20). Truly Matthew is a “Gift of Yahweh”! If God can love, transform, and effectively work through a loathsome tax collector like Matthew, imagine what he is capable of doing with you and me.
--Kevin L. Moore

Endnotes:
1 Since Matthew is called “Levi the son of Alphaeus” in Mark 2:14 (cf. Matt. 9:9; 10:3), it is possible that he was the brother of James the son of Alphaeus (Matt. 10:3; Mark 3:18), but this is not certain since Alphaeus was a fairly common name. If the connection is valid, Matthew’s mother was Mary and he had another brother named Joses or Joseph (Mark 15:40).
2 Cf. Neh. 11:15-17. R. T. France comments, “a Levite turned tax-collector might expect to earn the special disdain of his more orthodox fellow-Levites, and so be liable to record with greater emphasis Jesus’ conflicts with ‘orthodoxy’, as much for his own self-defence as for the guidance of other potential converts” (The Gospel According to Matthew [TNTC] 33).
3 See 2 Kings 24:17; Neh. 11:17, 22; cf. 1 Chron. 9:31; Neh. 8:4; Acts 1:23.
4 Since Matthew’s tax office was by the sea (Mark 2:13-14), he could have been involved in the taxation of fishermen (and potentially acquainted with Simon, Andrew, James and John), or he may have served as a customs official taxing goods that arrived in Herod Antipas’ territory. Following the death of Herod the Great, Antipas became tetrarch of the combined territories of Galilee and Perea, reigning from 4 BC to AD 39. See Jesus on Divorce & Remarriage: Contextual Insights.
5 These might have been Jews who were not diligent students and practitioners of the law and traditions (cf. John 7:49).
6 See Authorship of NT Gospels; also K. L. Moore, A Critical Introduction to the NT 60-63. “It was the Gospel that made Matthew famous, and not the other way around” (J. P. Lewis, The Gospel According to Matthew 1:12).
7 In the Synoptics those who held the position of ho telōnēs were “not holders (Lat. publican) of the ‘tax-farming’ contracts themselves, but subordinates (Lat. portitores) hired by them; the higher officials were usu[ally] foreigners, but their underlings were taken fr[om] the native population as a rule. The prevailing system of tax collection afforded the collector many opportunities to exercise his greed and unfairness. Hence they were particularly hated and despised as a class . . . . The strict Jew was further offended by the fact that the tax-collector had to maintain continual contact w[ith] Gentiles in the course of his work; this rendered a Jewish tax-collector ceremonially unclean” (BAGD 812).
8 See Matthew's Audience and Authorship of NT Gospels.

Related Posts: The Lineage of Jesus According to Matthew, The 12 Apostles (Part 1), Matthew's 'Two' Vs Mark & Luke's 'One'