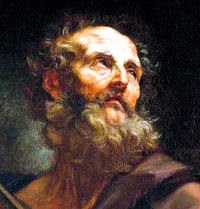 Thomas is mentioned by name twelve times in the New Testament, and most of what we know about him comes from the Gospel of John. The name Thomas, Aramaic T’oma and its Greek equivalent Didumos, means “twin” (John 11:16; 20:24; 21:2). There is no certainty, however, as to whether or not the apostle Thomas actually had a twin, and if he did, whom this might have been. If Thomas had a twin that did not survive, the name could have been given as sort of a living memorial or affectionate reminder. Or perhaps Thomas simply looked like someone else and was lightheartedly called “twin” as a nickname.1 The bottom line is, we simply do not know. In later tradition he is also identified as “Judas Thomas.”2
Near the end of the Lord’s earthly ministry, it was Thomas who expressed his willingness to die with Jesus (John 11:16). This is intriguing, seeing that the other disciples wrestled with confusion and bewilderment when it came to grasping the reality and significance of Christ’s impending death (Mark 9:10, 32). Simon Peter refused to accept it (Matt. 16:21-22), offered to die “for” (huper = ‘instead of’) Jesus (John 13:37), and even tried to prevent it (John 18:10). Thomas, on the other hand, appears to have been the first of his apostolic colleagues to understand that Jesus must die. In fact, Thomas encourages the others to join him in accompanying the Lord to Jerusalem to perish “with” (meta) the Lord. Thomas is seen here as a man of insight, courage, leadership, and devotion.
When Jesus promised to prepare a heavenly abode for his followers and to then return for them in the future (John 14:1-4), Thomas replies, “Lord, we do not know where You are going, and how can we know the way?” (v. 5).3 This candid admission of ignorance accompanied by a request for more information shows Thomas to be transparent and inquisitive. There were occasions when the disciples were hesitant or even fearful about asking the Lord for clarification (Mark 9:9-10, 32), yet Thomas eagerly seeks answers. And thanks to the prompting of Thomas’ question, the response given is one of the most profound statements of Jesus recorded in the Gospel records: “I am the way, the truth, and the life. No one comes to the Father except through Me” (John 14:6).
Thomas was absent when the risen Lord made his first appearance to the disciples, and Thomas refused to accept their verbal testimony without empirical proof (John 20:24-25). It is here that Thomas has earned the unenviable reputation as “doubting Thomas” and historically has been labeled as such ever since. However, Thomas had no more doubts than the rest of the apostles prior to their having seen Jesus alive (cf. Mark 16:9-13). Would not fairness demand consistent reference to “doubting Peter,” “doubting James,” “doubting John,” etc.? Thomas simply needed confirmation, and the Lord graciously provided it (John 20:26-27). Faith is not a blind leap in the dark but stands on the sturdy foundation of sufficient evidence that yields conviction and confidence (Heb. 11:1).
With a solid basis upon which to build his faith, Thomas is the first on record to acknowledge Jesus as “My Lord and my God” (John 20:28). Note that this affirmation was spoken decades before the apostle John penned comparable words in the opening of his Gospel (John 1:1-3). These two terms, kurios (Lord) and theos (God), are employed in the Greek New Testament to translate the Hebrew YHWH (LORD) and elohim (God) (Matt. 4:7, 10; Mark 12:29-30; Luke 1:68; 10:27; Acts 3:22). Moreover, they are always used together in the New Testament with reference to the Supreme Deity (Acts 2:39; 4:24; 7:37; 1 Pet. 3:15; Rev. 19:1, 6). Jesus accepts and commends Thomas’ confession, and affirms: “Blessed are those who have not seen and yet have believed” (John 20:29).
The disparaging label “doubting Thomas” is unfair and undeserved. There is so much more to him than his short-lived struggle with uncertainty (which, incidentally, he equally shared with all the other apostles!). Thomas was humble and honest. Because of his inquisitive nature, he searched for answers, gained valuable insights, and grasped profound truths long before anyone else did. He was a man of rock-solid faith, wholly devoted to Christ and his mission. According to tradition Thomas traveled east to proclaim the gospel in Parthia and then on to India, where he was killed with a spear and his remains later buried in Edessa.4 Thank God for dedicated servants like faithful Thomas.
--Kevin L. Moore

Endnotes:
1 Note that he was called “twin” in both Aramaic and Greek. In the Egyptian Book of Thomas the Contender, Jesus is reported as saying to Thomas, “Now, since it has been said that you are my twin and true companion, examine yourself …” While it is not possible that Jesus had a literal twin (cf. Matt. 1:20-25), it is within the realm of possibility that Jesus and Thomas looked enough alike that others may have made this observation and simply called Thomas “the twin” as a nickname.
2 Cf. the gnostic Gospel of Thomas from Egypt and the Syrian Acts of Thomas.
3 All scripture quotations are from the New King James Version.
4 Origen, quoted by Eusebius in Eccl. Hist. 3.1; Acts of Thomas; Ephraem, Carmina Nisibina 42.1-4; cf. Benedict Vadakkekar, Origin of Christianity in India: a Historiographical Critique (Delhi: Media House, 2007). Thomas reportedly arrived in Muziris of India in the year 52 and converted a number of people. Today there are believers there called Nasranis or “Saint Thomas Christians.”