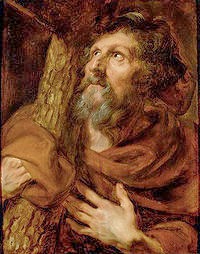 Philip is always listed fifth among the apostles, and most of what we know about him comes from the Gospel of John. Even though Philip was a Galilean Jew, his name (Philippos), meaning “horse lover,” is a Greek name.1 The fact that Jesus “found Philip” (John 1:43) may suggest that the Lord was seeking him out. Philip was from Bethsaida, the hometown of Peter and Andrew (v. 44). Not only was he one of Christ’s earliest disciples, he in turn directed Nathanael to the Lord (vv. 45-51).
Having just returned from an intensive evangelistic campaign, Philip and his fellow-apostles were tired and needed to rest. But a demanding crowd had other plans (Mark 6:30-34). Jesus singled out and tested Philip, enquiring of him where bread might be purchased to feed these 5,000 hungry people (John 6:5-6). Philip replies, “Two hundred denarii worth of bread is not sufficient for them, that every one of them may have a little” (v. 7 NKJV). For the average manual laborer, a denarius was equivalent to one-day’s wages. Philip recognized, from his limited perspective, that even eight months’ wages would not be enough to feed such a large group. Yet from the divine perspective Philip and his companions needed to learn about the Lord’s compassion, power, and providence, although the development of their understanding and faith was a slow and gradual process (Mark 6:34, 52; 8:17-21; cf. John 12:16).
On another occasion Philip was approached by certain Greeks who wanted to see Jesus (John 12:20). From an outsider’s viewpoint, evidently Philip, having a Greek name and having grown up in the culturally diverse region of Galilee, was approachable. Nevertheless, not being a lone spirit he recruits Andrew (another Galilean Jew with a Greek name) to serve as co-liaison (v. 22). This prompted Jesus to speak of his imminent atoning death, while also making statements about humility and sacrifice, service and discipleship, and the honor that is due the heavenly Father (vv. 23-28a). When the voice of affirmation responded from heaven, Philip would have been among those who heard it (vv. 28b-30).
In the hours leading up to Christ’s arrest, trials, and execution, it was Philip who made the request, “Lord, show us the Father, and it is sufficient for us” (John 14:8).2 Philip’s statement led to an extensive response from Jesus concerning his deity, his divine authority, his divine power, his divine intercession, his divine teachings, and the sending of the divine Spirit of truth (vv. 9-21).
It is traditionally believed that the apostle Philip, in the year 63, sent Joseph of Arimathea to Great Britain, where Joseph settled with other disciples at Glastonbury in Somersetshire and established the Lord’s church.3 Philip himself purportedly evangelized in Syria, Phrygia, and Greece before dying as a martyr (either by crucifixion or beheading) in the Greek city of Hierapolis.4
Jesus had taken the initiative in calling Philip, and Philip did not hesitate to answer the call. Not only was he approachable as an advocate of the Lord, he reached out to others to help them connect with Christ and be involved in Christ’s service. And due to Philip’s prompting, we have access to some of Jesus’ most profound teachings.
As the Lord continues to take the initiative (Acts 2:39; 2 Thess. 2:14), how am I responding? Am I fulfilling my God-given ministry as an ambassador for Christ (2 Cor. 5:17-20)? Am I approachable? Am I proactively reaching out? Am I committed enough to give my life totally to the Lord? Thank you, Philip, for providing such a worthy example to imitate.
--Kevin L. Moore

Endnotes:
1 Several ancient kings of Macedon were named Philip, including the father and the half-brother of Alexander the Great. On the multicultural environment of first-century Galilee, see The 12 Apostles (Part 1).
2 There are only two occurrences of the word arkeō (“to be sufficient”) in John’s Gospel (6:7; 14:8), both attributed to Philip.
3 See M’Clintock and Strong 4:1020. Around 208 Turtullian reported that Christ had  followers on the far side of the Roman wall in Britain. He writes: “all the limits of the Spains, and the diverse nations of the Gauls, and the haunts of the Britons, inaccessible to the Romans, but subjugated to Christ” (adv. Judaeos 7.4).
4 What is reported to be the tomb of Philip was discovered in 2011 in Hierapolis; see Biblical Archaeology Review 38:01 (Jan./Feb. 2012).