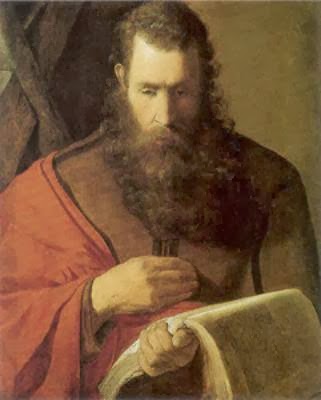 Andrew, the son of Jonah (or John),1 was a fisherman by trade, partnering with his brother Simon, James and John and their father Zebedee, and hired servants (Matt. 4:18-2; Mark 1:16-20; Luke 5:1-11). Andrew was from Bethsaida in Galilee (John 1:44) and lived near Capernaum with his brother’s family (Mark 1:29-30). The name Andrew (Greek Andreas) is derived from the Greek anēr (“man”) and its genitive form andros (“of a man”), meaning “manly” or “brave.” The fact that he had a Greek name and his brother Simon (Heb. Simeon) had a Jewish name is indicative of the cultural diversity of first-century Galilee.2
At the instigation of John the baptizer, Andrew was the first of his fishing companions to encounter Jesus and to recognize him as the promised Messiah, also bringing his brother to meet the Lord (John 1:35-42). Jesus must have made quite an impression on them. When the call to discipleship was issued, both Andrew and Simon left their fishing nets to follow him and to train as fishers of men (Mark 1:16-18).
Andrew appears to have been among the select few who got to witness the healing of his sister-in-law’s sick mother (Mark 1:29-31), the experience of which no doubt contributed to the development of his young faith. He was among the four who asked Jesus about the temple’s destruction and the sign of his second coming (Mark 13:3). This prompted the Lord’s prophetic discourse about Jerusalem’s imminent fall and the necessity of always being ready for Christ’s unexpected return (Matt. 24:4–25:46; Mark 13:5-36; Luke 21:8-36).4
As Jesus prepared to demonstrate his great power and providential care by feeding 5,000 hungry people, it was Andrew who informed him of the boy with five barley loaves and two small fish, though at the time Andrew seems to have been oblivious to what the Lord was capable of doing (John 6:8-9). They happened to be near Andrew’s hometown of Bethsaida (Luke 9:10), so Andrew could have known the boy personally, introducing yet another individual to Christ. This feeding miracle is significant in that it is the only supernatural work of Jesus (barring the resurrection) recorded in all four Gospel accounts. In fact, there was something important to be learned from this incident that the apostles did not immediately grasp (Mark 6:52; 8:17-21).5 Mature faith and spiritual insight obviously take time to develop.
On another occasion there were certain Greeks (perhaps God-fearers or proselytes?) who desired to meet Jesus, and it was Philip and Andrew (both of whom had Greek names) who served as intermediaries (John 12:20-22). Andrew is once again involved in bringing people to the Lord.
In the biblical record, as well as in subsequent church history, Andrew is markedly eclipsed by his older sibling. Even though Andrew was among the first of the Lord’s disciples, it is Simon Peter who is always listed before him, and more often than not Andrew is identified merely as “his brother” (Matt. 10:2; Mark 1:16; Luke 6:14; John 1:40; 6:8). Simon Peter consistently stands in the limelight, while Andrew remains hidden in the shadows (cf. Acts 1:15; 2:14, 37; 5:12-15, 29; 15:6-7; etc.).
Andrew was a truth-seeker, eagerly receptive to the preaching of John the baptizer and then of Jesus himself. He left all to follow Christ (Luke 5:11) and is probably best remembered as one who regularly brought others to the Lord. Like his fellow-apostles, Andrew struggled with his faith (Mark 4:38-41; 6:51-52; etc.) and momentarily forsook the Lord (Mark 14:15) before his penitent return to faithfulness (Acts 1:12-14).
According to tradition3 Andrew went on to evangelize areas now known as Ukraine, Romania and Russia, dutifully carrying out his ministry in places like Scythia, Georgia, Byzantium (Constantinople), Thrace, and Achaia. He is believed to have died as a martyr by crucifixion (possibly on a Latin X-shaped cross) in the city of Patras in Achaia, northwest of Corinth.
From Andrew we learn the importance of seeking and receiving and obediently responding to the message of Jesus Christ. He demonstrates that public recognition is of far less value than faithfully serving the Lord in whatever ways one is capable. He provides a notable example of bringing souls to Jesus. Though significantly overshadowed by his older brother, he is a great hero of the faith in his own right whose life is worthy of emulation.
--Kevin L. Moore