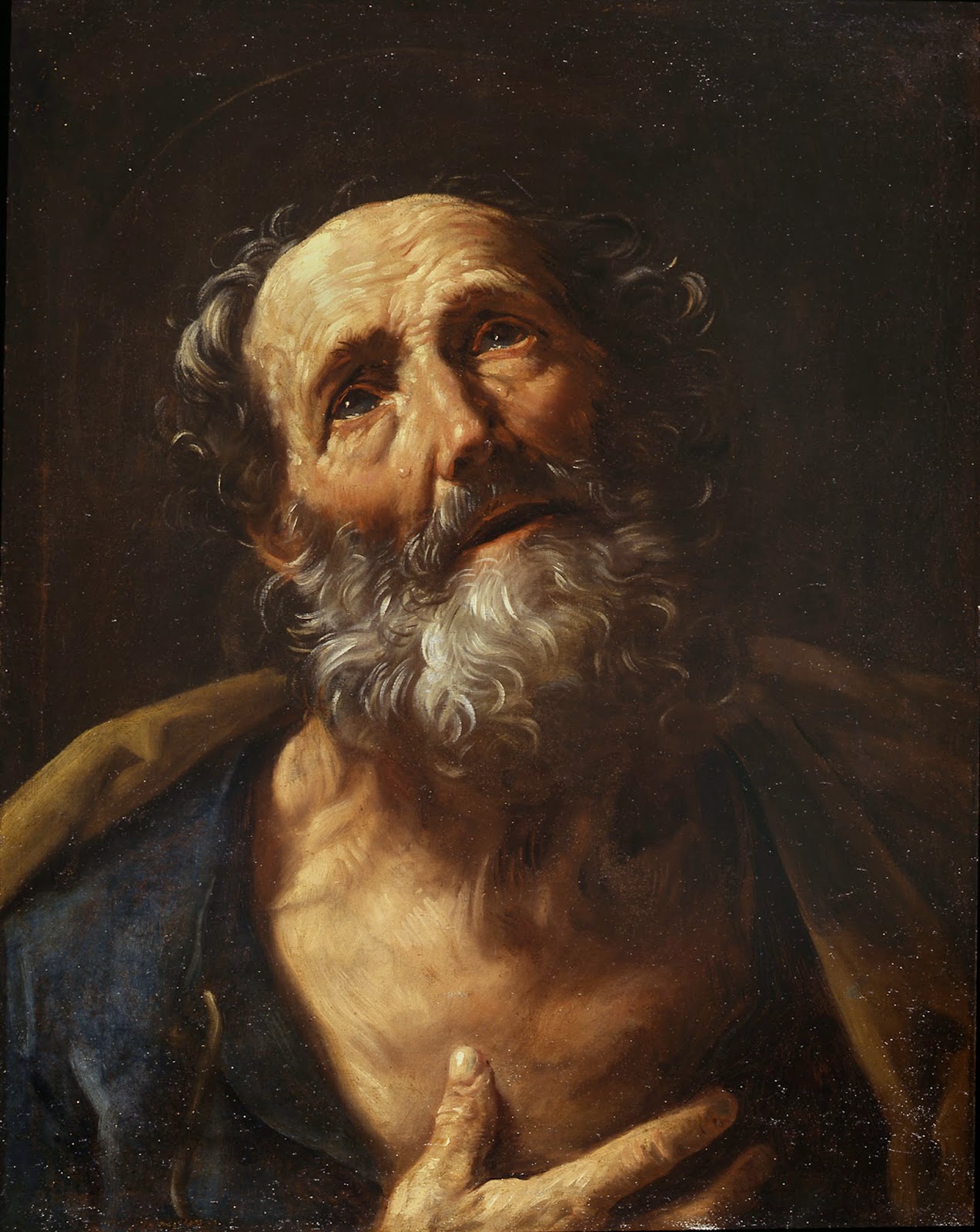 Simon, the son of Jonah (or John)1 (Matt. 16:17; John 1:42; 21:15-17), was from the coastal town of Bethsaida in Galilee (John 1:44). He was married and had a house in the vicinity of Capernaum, where he lived with his wife, mother-in-law, and brother Andrew (Mark 1:29-30). He also owned a fishing boat (Luke 5:3; John 21:3),2 and he and his brother worked in the fishing business with Zebedee and Zebedee's sons James and John, along with hired servants (Matt. 4:18-2; Mark 1:16-20; Luke 5:1-11).
When Simon first met Jesus, he was given the nickname Petros (Peter), the Greek equivalent of the Aramaic Kēphas (Cephas) (Mark 3:16; John 1:42). This name means "a stone,” indicative of firmness and stability. Though not descriptive of Simon at the time, it is surely what the Lord expected him to become. The Gospels consistently portray him as erratic and impulsive, slow to hear and quick to react. He regularly misread situations, misunderstood the Lord’s purpose, and required constant rebuke and correction (Matt. 14:31; 16:22-23; 26:33-35; Mark 9:5-7; John 13:6-8; 18:10-11; et al.). His given name Simōn (Simon) is the Greek form of Sumeōn (Simeon), derived from a Hebrew expression meaning "he has heard" (see Gen. 29:33). Thus whenever Jesus addressed him by his given name, it doubled as a subtle reminder to Simon of his pressing need to pay attention (e.g. Luke 22:31 = “Listen, Listen!”).3
Simon was perceptive enough to profess Jesus as "the Christ, the Son of the living God" (Matt. 16:16).4 This prompted the Lord to bless and commend him (v. 17) and to affirm: "And I also say to you that you are Peter [Petros], and on this rock [petra] I will build My church . . ." (v. 18a). While the masculine noun petros means "a stone" (i.e. a piece of a larger rock), the feminine petra is a large foundational bedrock and describes that upon which the church is built. Peter is merely a small (albeit significant) component, while Jesus himself is both the builder and the foundation of what he describes here as "My church." The rock-solid substructure upon which the church stands is the enduring truth that Jesus is "the Christ, the Son of the living God" (cf. 1 Cor. 3:11), and Simon Peter was bold enough to declare it.
Simon Peter is probably best remembered for two things: (1) his miserable failures, and (2) his remarkable comeback. It was shallow thinking and earthly-mindedness that led to his ongoing resistance of the heavenly plan (Mark 8:33; 9:5-7; John 13:8; etc.). In ignorance he carelessly disregarded the significance of Christ’s atoning death and even tried to prevent it (Matt. 16:21-22; John 18:10). He rashly professed his superior allegiance to Christ, only to forsake the Lord just a few hours later and deny him three times (Mark 14:27-31, 50, 66-72). Nonetheless, this wayward disciple was painfully aware of and heartbroken about his grievous errors (Mark 14:72; Matt. 26:75; Luke 22:62).
He was afforded special attention to help get him back on track (Mark 16:7; Luke 24:34; 1 Cor. 15:5; John 21:14-22).5 With the Lord’s patience and loving assistance the apostle regained his stability and, instead of wallowing in guilt and self-pity, he pressed forward. Having been admonished, “strengthen your brethren” (Luke 22:32), he proceeded to do just that (Acts 1:15 ff.). Entrusted with apostolic authority and divine guidance, he wielded “the keys of the kingdom of heaven” (Matt. 16:19) as he faithfully proclaimed the gospel of Jesus Christ (Acts 2:14 ff.; 3:12 ff.; 4:8 ff.; etc.). He endured cruel persecution (Acts 4:4; 5:18, 40; 12:3 ff.), exhibited strong leadership in the church (Acts 5:3 ff.; 6:4; 8:14 ff.; 15:7 ff.), and was intensely evangelistic (Acts 9:32 ff.; 10:25 ff.).
Simon Peter was still not perfect and went on to make other mistakes (e.g. Gal. 2:11 ff.). But characteristically his heart was in the right place, and that’s the kind of person with whom and through whom God can effectively work. This uneducated Galilean fisherman even contributed two instructive manuscripts to the collection of New Testament writings that have impacted (and continue to impact) the lives and destinies of multitudes.6
Jesus predicted Peter’s death as a martyr (John 21:18-19), and according to tradition he was crucified upside down in Rome during Nero’s persecution of 64-68. This followed the great fire of Rome, which Nero is believed to have started and then maliciously blamed Christians. It has been alleged that Peter was executed three months after the fire on dies imperii (the regal day anniversary), 13 October 64.
What can we learn from the turbulent life of Simon Peter? (1) God uses imperfect people. (2) Sometimes even imperfect people get it right. (3) Once a failure does not mean always a failure. (4) Multiple failings does not mean always a failure. (5) With God’s help a person can be significantly transformed. (6) However far one has come, there is always room for improvement. (7) A person’s influence lives on long after his earthly departure.
--Kevin L. Moore

Endnotes:
1 In Matt. 16:18 Jesus refers to Simon as Bariōna (Aramaic “son of Jonah”), whereas in John 1:42 and 21:15-17 the expression [huios] Iōannou (Greek “son of John”) is used, textual variation notwithstanding (cf. B. Metzger, Textual Commentary [2nd ed.] 172). Some have suggested that Matthew’s version is simply a play on words from what Jesus had said earlier in the chapter about the prophet Jonah (Matt. 16:4). But remember that Jesus was originally speaking in Aramaic to fellow-Aramaic speakers, and Matthew was an Aramaic-speaking Jew writing to Aramaic-speaking Jews (see Matthew's Audience). In contrast, John was writing to Greek-speaking Gentile readers (see John's Audience). Seeing that Aramaic expressions have been translated into Greek by these different authors in different settings for different audiences, which in turn have been copied by hand plethoric times and then translated again into English, the difference in spelling of a couple of letters is hardly significant. Unless otherwise noted, all scripture quotations are from the NKJV.
2 See Leaving All to Follow Jesus.
3 See Jesus Called Him "Peter" Only Twice. Note that in the early days of the Christian movement, Peter was regularly partnered with John (Luke 22:8; John 18:15; 22:2-4; Acts 3:1; 4:10; 8:14).
4 Consider also the earlier affirmation of Nathanael (John 1:49) and the collective acknowledgement of the apostles (Matt. 14:33).
5 See The Tough Love of Jesus.
6 For questions concerning the authorship of 1 and 2 Peter, see K. L. Moore, A Critical Introduction to the New Testament 204-13.