The Pastoral Epistles (Part 2 of 2): Authorship 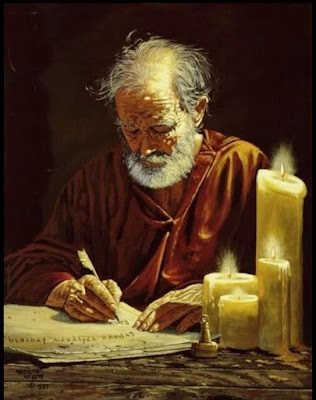 Each of the three letters claims to be from “Paul an apostle of Christ Jesus,” followed by personal comments by him (1 Tim. 1:3; 3:14; 2 Tim. 1:15-18; 4:9-13; Tit. 1:5; 3:12). In Titus the appellation doulos theou (“a slave of God”) is added (as in Rom. 1:1; Gal. 1:10; Phil. 1:1).1 By the time of Irenaeus (ca. 125-200) the Pastorals were unquestionably regarded as genuinely Pauline (Against Heresies 1.1; 1.16.3; 2.14.7; 3.14.1). These letters were utilized by Polycarp, Justin, Heracleon, and others. Clement of Rome betrays familiarity with these writings; also Ignatius, Tertullian, Clement of Alexandria, and the Muratorian Fragment. In fact, “the external attestation for the [Pastoral] Epistles … is as strong as that for most of the other Epistles of Paul, with the exception of I Corinthians and Romans” (D. Guthrie, NT Introduction 585-86). No early Christian writer ever doubted the Pauline authorship of the Pastorals.
Nonetheless, the Pastorals are the most disputed of all the writings in the NT bearing Paul’s name and are widely regarded among current NT scholars as forgeries composed in the apostle’s name near the end of the 1st century or early in the 2nd century.2 As far back as 1807, F. D. E. Schleiermacher was disputing the Pauline authorship of these letters (Über den sogenannten ersten Brief des Paulus an Timotheus), followed by F. C. Baur in 1835 (Die sogenannten Pastoralbrief des Apostels Paulus). However, not everyone assented to the Schleiermacher-Baur tradition (e.g. J. B. Lightfoot, Biblical Essays 399-418; T. Zahn, Introduction 2:1-133). H. Richards comments: “The reader might like to make his own mind up on this question, since a good case can be made for both sides. Whatever conclusion he comes to, he is assured of being in good company” (St Paul and His Epistles 143).3

1. The language and writing style of these epistles are quite different when compared to the other letters in the Pauline corpus.

2. The historical situation behind the Pastorals does not fit the framework of Acts.

4. The theology of the Pastorals lacks emphasis on typical Pauline doctrines.

5. Marcion’s canon (mid-2nd century) did not contain the Pastorals, and they are missing from the mid-3rd-century Chester Beatty Papyri (P46).

Responses to these objections

1. The role of amanuenses in Paul’s writings, as well as differences in time, circumstances, addressees, and subject matter, would readily account for any apparent differences in language and style. With reference to the criteria of vocabulary, style and theological motifs, E. E. Ellis observes: “the pseudepigraphal viewpoint was undermined by three new insights of twentieth-century criticism: the role of the secretary; the function of cosenders; and the presence of a considerable number of preformed, non-Pauline pieces in almost all of Paul’s letters” (“Pastoral Letters” 659, cf. 661; also “Pastorals and Paul” 45).4 If heavy use was made in the Pastorals of traditional material, the appearance of so-called “non-Pauline vocabulary” does not make a legitimate case against Pauline authorship (see J. B. Polhill, Paul and His Letters 399-400).
M. Prior argues that at least some of the differences between the Pastorals and the other letters of Paul may be due to the fact that the Pastorals were written as personal letters by Paul alone, whereas the rest were written with secretarial assistance (Letter-Writer 50). Other factors would include Paul’s advancing age and the potential effect of the Latin environment of Rome (E. F. Harrison, Introduction to the NT 364-65). Since these were the final letters in the Pauline corpus to have been written, differences in writing style would be expected. Scholars have observed stylistic differences between the first and seventh books of Julius Caesar’s Gallic War, likely the result of several years between compositions (see J. C. Sang, Selections from Julius Caesar’s Gallic War 2). Further, approximately 80% of the Pastorals’ hapax legomena are found in the LXX, the text in which the apostle Paul was steeped.
If an amanuensis had been used to draft these letters, it is interesting that several words in the Pastorals which have been identified as “non-Pauline” are found in Luke’s writings, and since Luke was with Paul at least when 2 Timothy was written (4:11), it has been suggested that Luke may have been his writing partner.5 Remembering that Luke was a physician, it is of further interest to consider that only in the Pastorals is the metaphorical use of certain words that mean to be sick and to be well. The theme of true and false riches is especially prominent in Luke’s writings and in the Pastorals, and a clear parallel is evident between Paul’s statement in 2 Tim. 4:7 and Luke’s record of Paul’s statement in Acts 20:24. “Perhaps the Lukan affinities in the Pastorals have a simpler explanation. Luke was Paul’s longtime companion. It is likely that the two would have had some mutual influence on the language and expression of each other” (J. B. Polhill, Paul and His Letters 400).6

2. The simplest explanation for why the Pastorals do not fit the framework of Acts is that the letters were written after the historical account in Acts was concluded.7

3. The absence of organization and a lack of perceived sophistication in the early stages of Christianity is an unwarranted assumption (cf. Acts 11:30; 14:23; 15:6; 20:17; Phil. 1:1). Even R. E. Brown acknowledges that an argument “that draws on comparative theology is very weak, since ‘advanced’ theological insights did not all come at the same time in every place” (An Introduction to the NT 697).

4. It is not realistic to expect Paul to have addressed the exact same themes in all of his letters (irrespective of audience, circumstances, and occasion), particularly in view of the fact that the Pastorals are addressed to his close colleagues who were already intimately familiar with the doctrines he taught.8 Furthermore, the letters to Timothy were sent to Ephesus (1 Tim. 1:3), where Paul had previously spent three years proclaiming the whole counsel of God (Acts 20:27, 31). Even the “preeminent” epistle to the Romans lacks some notable Pauline themes (e.g. the Lord’s Supper, the church, Christ’s second coming).

5. Marcion was a heretic who rejected any writings that did not support his views, including Matthew, Mark, John, and portions of Luke (cf. Tertullian, Adv. Marc. 5.1, 21). The Chester Betty Papyri are fragmentary, and the latter part of P46 (where the Pastorals would have been included) has not survived. Toward the end the copyist responsible for P46 appears to have been progressively writing in a smaller hand, thus the seven missing leaves could have contained the Pastorals (J. B. Polhill, Paul and His Letters 399). Alternatively, in view of the fact that Philemon is also missing from P46, J. D. Quinn proposes two separate collections of Paul’s writings, one for congregational letters and one for letters addressed to individuals, and that P46 only represents the former (“P46–the Pauline Canon?” 379-85).

If the Pastorals were in fact written by someone other than Paul, by using Paul’s name and other personal comments supposedly from or about the apostle,9 the pseudonymous writer was obviously being deceptive – the fact of which is perplexing in view of the warnings given in each letter against deceivers (1 Tim. 4:1-2; 2 Tim. 3:13; Tit. 1:10).10 While accepting the self-claims of authorship of only the seven undisputed letters of Paul and the book of Revelation (by an unknown John) and attributing the rest of the NT documents to pseudonymous authors, B. D. Ehrman casually remarks: “A large number of books in the early church were written by authors who falsely claimed to be apostles in order to deceive their readers into accepting their books and the views they represented” (Jesus Interrupted 136). Unfortunately, this is the all-too-common assumption that undergirds the bulk of scholarly literature today.
The least complicated and least problematic solution is to simply accept what the texts claim for themselves. A number of critical scholars still argue in favor of (or at least lean toward) the Pauline authorship of the Pastorals, including D. A. Carson, D. J. Moo and L. Morris, An Introduction to the NT 359-71; E. E. Ellis, “Pastorals and Paul” 45-47; Paul’s Use of OT 5-9; D. Guthrie, Pastoral Epistles 48-53; J. P. Holding, “A Defense”; G. W. Knight, Pastoral Epistles 21-45; C. Spain, Letters 8-15; B. Witherington III, Paul Quest 110-13; K. Wuest, Pastoral Epistles 13-15, 21-23; see also the commentaries of J. Jeremias, J. N. D. Kelly, R. C. H. Lenski, and C. Spicq. While some do not recognize the authenticity of all the Pastorals, they support the Pauline authorship of 1-2 Timothy (A. Kenny, Stylometric 80-100) or at least 2 Timothy (J. Murphy-O’Connor, Paul: A Critical Life 356-59).
--Kevin L. Moore