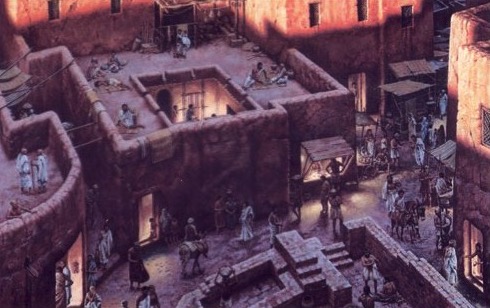 In Acts 2:1-4 the description of the Pentecost-day outpouring of the Holy Spirit begins with these words: “they were all together in the same [place]” (v. 1).1 To whom does the pronominal reference apply? Is Luke speaking of the12 apostles of 1:26, or the 120 disciples of 1:14-15?

In the late 4th century John Chrysostom offered his thoughts on the question: “Was it upon the twelve that it came? Not so; but upon the hundred and twenty.”2 In the generations following, this has been a popular interpretation. The “all,” according to Heinrich A. W. Meyer, “were not merely the apostles, but all the followers of Jesus then in Jerusalem, partly natives and partly strangers, including the apostles” (emp. in the text).3 R. C. H. Lenski confidently affirms: “‘All’ refers to the persons mentioned in 1:12-15 and certainly includes the women …”4 Ernst Haenchen concurs, making application to “the Christians, i.e. the one hundred and twenty persons of 1.15 [‘not only the Apostles’] …”5 David J. Williams comments, “By ‘all’ we may assume that at least the hundred and twenty of 1:15 were included …”6

As prevalent as this view has been and continues to be, is it correct? Have those making this claim given sufficient, unbiased attention to key contextual matters?

Between Christ’s ascension and the Day of Pentecost the apostles did assemble with approximately 120 believers (Acts 1:15), yet several days elapsed from the apostles’ return to Jerusalem to the outpouring of the Spirit (cf. 1:5). Seeing that Pentecost was fifty days after Passover (Lev. 23:15-16), and from Christ’s resurrection to his ascension was forty days (Matt. 28:1; Acts 1:3), over a week stood between the Lord’s ascension and the Day of Pentecost. The temple was the regular assembling place for larger groups (Acts 2:46; 5:42), so it is helpful to note their prayer meetings were in the temple (Luke 24:53), not in the upper room where the apostles were residing.

When Luke reports that “they” were in the same place (Acts 2:1), the nearest antecedent is the “apostles” (1:26). In order to include 120 men and women, one has to skip back over eleven verses and ignore the immediate context. Further, the apostles are the only ones recorded in Acts 2 as speaking from God, and the masculine pronoun houtoi (“these”) in verses 7 and 15 (literally “these men”) clearly has reference to them. Contextually the baptism of the Holy Spirit had not been promised to all believers but specifically “to the apostles whom [Christ] had chosen” (Acts 1:2-8; see also 2:43; 5:12).7

What About the House?

All who received the outpouring of the Spirit on this occasion were in “the same [place]” [tò autó] (Acts 2:1), more directly identified as “the house” [tòn oîkon] (v. 2). Earlier, at the Lord’s instruction, Peter and John had located the place where Christ would eat the Passover meal with his 12 apostles, viz. a “lodging place” or “guest room” [katáluma] that was a furnished “large upper room” [anágaion méga] in “the house” [tēn oikían…tēs oikías] (Mark 14:14-15; Luke 22:10-12). Was this the same locality in Jerusalem as “the upper room [tò huperōon] where they were staying” (Acts 1:13)? Although the text is not definitive, Luke is alluding specifically to “the house,” i.e., not just any house but one in particular, presumably the site of previous reference.

What do we know about houses in 1st-century Palestine?

During the Roman period typical urban housing in this region consisted of at least four types: (a) the simple house; (b) the courtyard house; (c) the shop-house; and (d) the mansion (domus).8 These dwellings differed in size, architecture, construction materials, and furnishings, indicative of various socioeconomic levels and family units.

The most common type of housing, in which the majority of the population lived, was the simple house. It was quadrangular in shape, joined to a courtyard (for domestic chores), and divided into three or more rooms. These dwellings ranged in size from about 215 sq. feet (20m2) to 2152 sq. feet (200m2), although most were comparatively small. Not considering room divisions and the courtyard, the area would be comparable to the interior of a school bus or three-car garage. If this is the type of residence alluded to in Acts 2:2, it would have been extremely difficult if not nearly impossible to cram 120 people in any one room.

Another type of residence was the courtyard house, ranging in total size from around 2152 sq. feet (200m2) to 3229 sq. feet (300m2). These were occupied by multiple families of slightly higher economic standing, generally consisting of four dwellings of two or more rooms each, sharing a courtyard and a single entrance. Since Luke reports “they were all together in the same [place]” (Acts 2:1), almost certainly this type of structure would be excluded if 120 occupants were in view. While the total area would approximate a small one- or two-bedroom apartment, about half to three-fourths the size of a modern-day basketball court, each room would not be much bigger than that of a simple house.

Houses with shops (tabernae) were common in most cities of the Roman Empire, as were apartment buildings, many of which were built on top of the shop-houses. Even though there is no archaeological evidence in Jerusalem of ancient apartment buildings, neither a shop-house nor an apartment would have been large enough to facilitate a sizeable group.

The other type of house was the much more spacious mansion (domus), inhabited by the wealthy upper class. Archaeological remains of such dwellings have been unearthed in Galilee, the best preserved of which is a 72-feet (22m) by 39 feet (12m) building with eleven rooms for various usages. “These mansions had space enough to house a large family and a good number of servants, as well as to receive clients and friends, and to conduct the business transactions and social gatherings that were frequently held in the large houses in Antiquity (Vitrubio, De Architectura 6:5, 1-12). The existence of this type of house in relatively high numbers is one more indication of Graeco-Roman influence in Galilee during the Hellenistic and Roman periods.”9

Assuming there was such a house farther south in ancient Jerusalem,10 and assuming Jesus and/or his immediate disciples had access to it, and assuming this is potentially the kind of structure Luke is alluding to in Acts 2:2, would approximately 120 people fit in any one room? The largest space in these homes was the atrium, and archeological discoveries elsewhere have conclusively shown that the atrium in a large Roman-style residence would accommodate only about 30 to 50 people—still inadequate for a gathering of about three times that size.11

Alternatively, if “the house” of Acts 2:1-2 was in fact the location of “the upper room where they were staying” (Acts 1:13), in its urban setting the building would have been less spread out like the typical mansion and would have occupied a smaller section of land and thus built upward with more than one story. The landmass of urban environments in antiquity was relatively small compared to modern cities, while population density was rather high with very crowded living conditions.12

The biblical text itself sufficiently demonstrates that the referential “they” of Acts 2:1 is the small group of 12 apostles of 1:26. Considering there were no chapter and verse divisions when Luke first penned these words, the connection and flow of thought are even clearer. Sociocultural and archaeological evidence provides further confirmation, helping to illuminate our understanding even more.