The Sociocultural Context of the New Testament (Part 6): House Churches 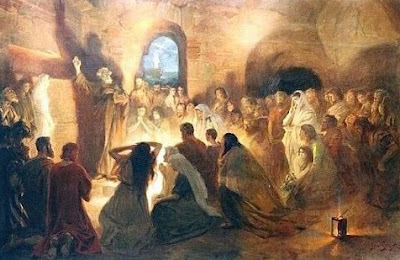 The landmass of urban environments, where early Christianity took root, was relatively small compared to today’s megacities, while population density was rather high. This made for very crowded living conditions, and privacy would have been a rarity (W. A. Meeks, First Urban Christians 28-29, 75-76). R. Jewett maintains that city churches assembled in tenements, restricting the number of members who could meet together (“Tenement Churches and Communal Meals,” BibRes 38 [1993]: 23-43), and A. A. Bell, Jr. concludes that a small apartment “is likely to have been the sort of ‘house’ in which the earliest Christian groups gathered” (Exploring the New Testament World 207).1 However, this was probably not the case for every congregation.

In Corinth at least some of the converts were among the upper echelons of society [eugenēs] (1 Cor. 1:26; 11:22),2 and Gaius had a house large enough to accommodate “the whole church” (Rom. 16:23). There are 17 known names of Christians at Corinth (not to mention those unnamed) plus households,3 which would have required a fairly sizeable dwelling. Unless there were multiple house churches in Corinth, which is unlikely in view of the fact that Gaius was the host of “the whole church,” the congregation probably consisted of fewer than 50 members. Archeology has conclusively shown that the atrium or courtyard in a large Roman-style home would accommodate only about 30 to 50 people.4

A typical upper class Roman house was centered around a columned courtyard with an open room (atrium), in the center of which was a pool (impluvium). At the opposite end from the entrance was a raised area (tablinum) containing a table and used by the family as a reception area and for ceremonial functions. The congregation in Corinth probably gathered in the atrium of Gaius’ home, and could have used the impluvium as a baptistery and the tablinum for the Lord’s Supper. In the ruins of a Roman garrison city in Mesopotamia (Dura Europos), archeologists have discovered the remnants of the earliest known building to be used by Christians explicitly as a place of worship (ca. 230-240). “The building was a converted house, with a large meeting room and a second smaller room holding a baptistery” (D. Irvin and S. Sunquist, History of the World Christian Movement 54-55).

J. D. G. Dunn comments, “Historically, it is a reminder of how dependent on quite tiny groups was the development of Christianity …. Theologically, the point is that the dynamic of being ‘the church of God’ did not require large groups in any one place” (Theology of Paul 542). W. A. Meeks adds, “The house as meeting place afforded some privacy, a degree of intimacy, and stability of place. However, it also created the potential for the emergence of factions within the Christian body of a city” (First Urban Christians 76).5 Although Meeks proposes Corinth as an example, the situation at Rome is a better representation. Paul writes to “all in Rome … called saints” (Rom. 1:7) and sends greetings to what appears to be three or more separate house churches (16:5, 14, 15) comprised of both Gentile believers (1:5-6, 13; 11:13-24; 15:14-21) and Jewish believers (2:17; 6:14-15; 7:4; 16:3, 7, 11). He devotes a sizeable block of the letter addressing apparent division among them (14:1–15:13).

While the divine will is for Christians to regularly assemble together (Heb. 10:24-25),6 a particular meeting place is not enjoined and would necessarily depend on the unique circumstances of each group. While other assembly places are noted in scripture (e.g. Acts 5:12; 16:13; 26:11), the house proved to be the most expedient for many 1st-century congregations.