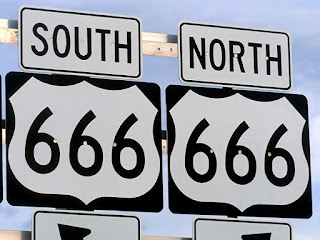 The number 666 occurs four times in the Bible. In the 10th century BC, Solomon received 666 talents of gold annually (1 Kings 10:14; 2 Chron. 9:13). Four centuries later, among the Jewish exiles who returned from Babylon to the land of Judah, there were 666 from the family of Adonikam (Ezra 2:13). These figures, employed in straightforward historical narratives, are to be taken at face value with no symbolism or underlying meanings intended. However, the same number appearing in the highly symbolic book of Revelation is different. How is it used and what does it mean in Rev. 13:18?1

The number “seven” is probably the most recognizable symbolic figure in scripture,2  signifying perfection or divine completeness. The number “six” is therefore short of perfection, and by tripling it (666) the symbol of imperfection and fallibility is intensified.

What it does not mean

Contrary to popular opinion, the number 666 does not represent the Antichrist, the devil, or a particular religious or government official in history. Gematria, the assigning of numerical value to letters of the alphabet, has been applied through the years to the number 666 in numerous attempts to identify a specific individual or organization. Results have included Julius Caesar, Nero Caesar, Domitian, Napoleon, Hitler, Catholicism, Protestantism, modern technology, et al. The problem is, different languages are used (Greek, Latin, Hebrew), different values are assigned to each letter, sometimes titles are added and names misspelled to make it fit, resulting in endless possibilities. The entire process is speculative, inexact, and dubious.

In Rev. 13:1-10 the sea beast represents the Roman Empire (contextually near the end of the 1st century AD), and the land beast (vv. 11-17) the false religion of the Imperial Cult aligned with the government. Empowered by the dragon (Satan), emperor worship is enforced with violence and sanctions.3 Nevertheless, true “wisdom” and “understanding” assign the number 666 to the conglomerate beast, which “is the number of a man” (v. 18), i.e., imperfect and fallible to the extreme. Despite the exalted claims of deity and mighty displays of power, the ferocious enemy of God’s people (led by “a man” professing to be a god) is far removed from anything truly divine. The cryptic message, hidden to those unfamiliar with the numerical symbolism, was much needed by the late-1st-century persecuted Christians who were tempted to give in to the pressure. Such a reminder offered reassurance and hope.

There is nothing inherently sinister about the number 666. No need to avoid it or feel compelled to change an address, license plate, or phone number containing the three digits. On the 16th of October 2020 the Tennessee Department of Health reported 666 new cases of Covid-19.4 The exact same figure was reported in South Carolina four days later,5 and in North Carolina a couple of months earlier.6 The only thing this means is that fewer than 667 and more than 665 new cases were reported.

The emblematic message conveyed through this number nearly two millennia ago in Rev. 13:18 is that human beings, earthly governments, false religions, and anti-Christian opponents are fallible and imperfect, irrespective of deceptive appearances and grandiose assertions. God alone is perfect and his word complete and infallible, so trusting and remaining loyal to him is the only way to ensure victory in the end.

“And I saw something like a sea of glass mingled with fire, and those who have the victory over the beast, over his image and over his mark and over the number of his name …” (Rev. 15:2).7 Whether or not we ever face the same or similar challenges as our 1st-century brethren in Western Asia Minor, the Lord’s promise still holds true: “Be faithful until death, and I will give you the crown of life” (Rev. 2:10c).

1 There is a textual variant in Rev. 13:18 wherein some manuscripts record the number 616 (e.g. the 3rd-century P. Oxy. 4499 or P115, and the 5th-century Codex Ephraemi Rescriptus). However, most modern scholars agree with Irenaeus (ca. 130-202), who regarded this number “spurious” and the result of scribal error. Irenaeus reported that in his day the number 666 was “in all the most approved and ancient copies,” confirmed by men who knew the apostle John personally (Adv. Haer. 5.3.1). Unless otherwise noted, scripture quotations are from the NKJV.

7 In contrast to the evil beast having arisen out of the tumultuous sea (Rev. 13:1), before God’s throne the sea is calm and clear but mingled with the fire of righteous indignation. Those who gain victory over the beast have “harps of God,” a symbol of jubilation and triumph in contrast to the fall of Rome, where the “sound of harpists, musicians, flutists, and trumpeters shall not be heard in you anymore…” (18:22).