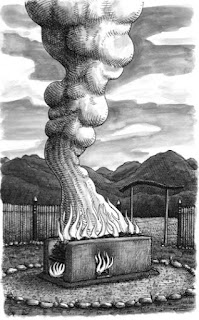 Cremation, as an alternative to burial, is the final disposition of a dead body through burning. In some ancient cultures it is the preferred method of the disposal of human remains, carried out as a respectful and honorable ritual.
The Bible does not dictate a specific way of disposing of dead bodies, although most recorded accounts are burials, either in the ground or in a tomb. Burning a human body was sometimes done as a punishment or a symbol of punishment or an act of desecration (Gen. 38:24; Lev. 20:14; Josh. 7:25; 2 Kings 23:15-20; Amos 2:1). The dead bodies of Saul and his sons, having already been desecrated by the Philistines, were burned by noble men to prevent further desecration (1 Sam. 31:11-13).

At death the human spirit departs from its mortal shell; the spirit lives on but the body decomposes to dust (Gen. 3:19; Jas. 2:26). Even a cremated body does not totally disappear, with approximately 2.4 kg (5.3 lbs.) of remains. Whether a human body is consumed in a house fire, is eaten by a shark, deteriorates slowly in a grave or rapidly in a funeral pyre, does not affect what Almighty God has in store for the future. However a corpse disintegrates, the Lord has the power to reunite the human spirit with a renewed, incorruptible, spiritual housing that lives forevermore (1 Cor. 15:35-54; 2 Cor. 5:1-4).

Related Posts: What happens when we die?